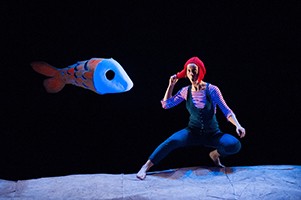 Houseboat, a contemporary adaptation of the story of Noah's Ark set to music by Xavier Montsalvatge Y Claude Debussy, premieres in the season Little Abao Hand ABAO-OLBE. This show told through narration, the puppets, gestural theater and projections take the stage “family sessions” on Saturday 1 February at 18:00h and Sunday 2 February in double feature at 12:00 and to the 18:00h; and in “school session” the 3 February at 11:00h. One more effort by ABAO-OLBE to make opera available to everyone, especially the youngest.
A musical tale of fifty minutes of entertainment and fun recommended from the age of three in which the story of Noah is told, a girl whose greatest dream is to see the rainbow, but he lives in a desert and lonely place where it never rains. One day, the little girl rescues a goldfish that warns her of the beginning of the deluge and Noah builds a floating house to save all the animals; but in the count some are missing: the flea, elephant, the kangaroo… Noah decides to go looking for them in this great musical adventure. This co-production of the Gran Teatre del Liceu, the International Music and Dance Festival of Granada and La Maquiné has been designed by Joaquín Casanova and Elisa Ramos.
The music adapted and performed by José López Montes with a solo piano is staged with puppets, dancers, projections and a narrator. Added to this is a rich language, expressive and attractive that gives rise to a show of great agility, beauty and reverie to the delight of young viewers. The Arriaga Theater is the stage where José López Montes at the piano, Elisa Ramos as 'Noah', Lola Martín as 'Narrator' and Ana Puerta, José Rodríguez and Elisa Ramos herself as manipulators of the puppets and objects that appear on stage offer us this current version of the myth of Noah that is based on respect for the Earth and the Environment.
The next appointment with ABAO TXIKI will be in March with Bremengo Musikariak, third title that ABAO OLBE programs in Basque.