The town lies opens at Real 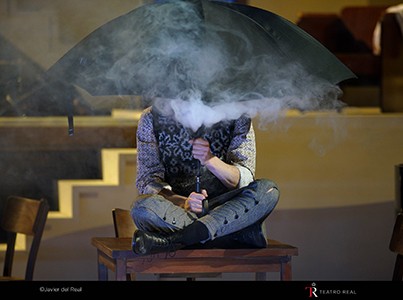 The next 20 February will take place in the Teatro Real he World Premiere from The city of lies, from Elena Mendoza Y Matthias Rebstock, based on four stories Juan Carlos Onetti (1909-1994) featuring women whose stories intertwine in Santa Maria, elapses imaginary city where much of the literary fiction of the Uruguayan writer. They offer five functions, the days 20, 21, 23, 24 Y 26 February.

In the genesis of The city of lies, in charge of Gerard Mortier for the Royal Theatre, Elena Mendoza and Matthias Rebstock created simultaneously, working hand in hand, the script, stage direction and music. the score, after completion, and it incorporates the guidelines of the dramatic action, the acting interpretation and performance space conceived during the process of creating the work, in which also they participated the set designer Bettina Meyer, her costume Sabine Hilsher and some of the players ─cantantes, actors and instrumentistas─, exploring the multiple codes of contemporary musical theater.

In a world of fantasy and madness, four women ─ a lady unnamed (soprano), Moncha (viola), Grace (soprano) and Carmen (accordion)─ reject the hostile and claustrophobic reality of Santa Maria he took refuge in a deranged and absurd parallel world, away from the neighborhood whose life revolves around a crossroads of dead ends, from which escape is only possible through the "lie": metaphor for all forms of evasion, including art.

The first woman, whose history vertebra all other, hire a stage manager to direct the representation of a pleasant dream he had one day, and interprets his own death. The second roams rebuffed with a brand new wedding dress, celebrating, every night of moon, his marriage to a lover and late. Third, wound pain and betrayal, comes the break with her husband sending lewd pictures with other men. The últimallega to Santa Maria with a suitcase as real stories that seem to lie ...

Each story is framed in a musical universe, but the stories have a dramaturgical fabric and a common formal structure. A) Yes, in each tale The city of lies there is one for the protagonist, a duet, a scene of gossip among men of Santa Maria, a radio news, etc., as it happens in the various accounts of Onetti, by passing the same characters, as Dr. Diaz Grey, Jorge Malabia, the bartender or the apothecary.

In the den and living room, members Head of the Royal Theatre Orchestra, under the musical direction of Titus Engel, who also he directed in 2012 the world premiere of The blank page, from Pilar Jurado. She and Elena Mendoza successfully explore different worlds and international prestige of Spanish contemporary musical creation in female.

THE FOUR TALES AND ACTORS

A woman hires a stage director to represent a pleasant dream he had one day ...

Carmen arrives at Santa Maria with a huge suitcase and a young dazzles telling incredible stories ...

Moncha, with her new wedding dress, celebrates the wedding with her boyfriend and deceased, the full moon…

Grace betrayal of her husband to the oath they did come, sending lewd pictures with other men ...

Everyone to the Gayarre! Children's workshop with address and presentation of Fernando Palacios

What is a premiere? All you need to know about a current opera