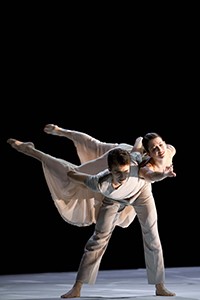 The renowned German dance company Sasha Waltz & Guests It will perform at the Royal Theater next week to offer four functions, between days 9 Y 12 of March, with a program composed of three choreographies well differentiated, all they created by Sasha Waltz and selected from his extensive repertoire, in which it will give you a sample of its innovative character and its enormous expressive and communication skills. An evening of dance will feature the Head of the Royal Theatre Orchestra, under the musical direction of Titus Engel.

The show begins with The Afternoon of a Faun (Afternoon for a faun), from Claude Debussy, and a scene of Romeo and Juliet, from Hector Berlioz, to give step- Consecration (Sacre), a new version of The Rite of Spring, from Igor Stravinsky, released by the company last 2013. All they choreographed by Sasha Waltz and in which he has had his usual collaborators for scenography, costumes and lighting.

For the beautiful complexity of the symphonic poem by Debussy, Prelude to the Afternoon of a Faun, Waltz draws a set of movements slow and subtle, explosive exchanges, framed in a colorful staging designed by Giom / Guillaume Bruère, also responsible for the costumes. Actions take place loaded with harmony and seductive sensuality.

Love Scene, Love scene, It is a fragment length of Romeo and Juliet, Hector Berlioz, in which the pair of young lovers represents their love tenderly, without melodrama, through gentle gestures strongly supported by music. Although apparently the choreography offers a more conventional narrative style, has striking contrasts and dancers exchange their usual positions, male-female, without losing the essence of romanticism.

Choreographic intensity changes dramatically with the entry into scene Consecration, Sacre, by Igor Stravinsky. Sasha Waltz was commissioned by the Mariinsky Theater in St. Petersburg to create a new choreography for this key work of Modernism, whose premiere took place in 2013, just one hundred years after its premiere in Paris with the legendary choreography of Vaslav Nijinsky for the Ballets Russes.

Berlin's creative has always been interested in archaic myths and rituals to conjure the power and order of nature. Stravinsky's music, fraught with tension, sounds emphasized and constant repetition of musical motifs, It gives you the opportunity to reflect the cyclical nature structure, Hypnotic getting a bold and recreation, with movements that exploit amid calm culminating in a frenzied dance ritual in which "the individual sacrifices for the good of the community", Waltz explains itself.

Since its founding in Berlin 1993 Sasha Waltz & Guest He has been true to its spirit of collaboration between different art forms, with the participation of architects, visual artists, choreographers, filmmakers, designers, musicians, singers and dancers. In the German capital cooperates with numerous institutions such as municipal theaters, opera houses and museums and contributed to the establishment of innovative production spaces for artistic dialogue. Its wide range of activities in different countries in Europe with educational projects, training and participation of various artists, He has led the company to be designated Cultural Ambassador of the European Union, considering dance as an art form that overcomes the barriers of language and geographical barriers banishes.