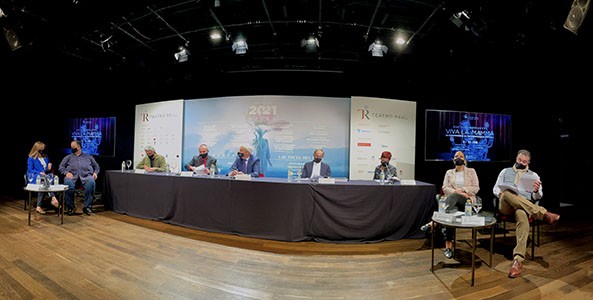 The new production of the Teatro Real, whose title, Long live the mother, was coined by film director Helmut Käutner, is a co-production with the Lyon and Geneva Operas, where it was presented with great success.

Laurent Pelly, that Real has directed Daughter of the Regiment (2014), Hansel and Gretel (2015), The Golden Cockerel (2017) Y Falstaff (2019), returns with another title full of humor in which it shows, once again, his genius and ingenuity in treating comedy and directing actors.

As well Evelino pido will be in front, again, of the Titular Choir and Orchestra of the Royal Theater, that he already directed in La Gioconda (2007) e I puritani (2016). Three of the 11 functions will be directed by José Miguel Pérez Sierra, director musical, Recently, from Don Fernando the Emplazado.A double cast will give life to the grotesque characters of Donizetti, in which they stand out Carlos Álvarez and Luis Cansino, Nino Machaidze and Sabina Puértolas, Xabier Anduaga and Alejandro del Cerro, Borja Quiza and Gabriel Bermúdez, Sylvia Schwartz and Francesca Sassu, seconded by Pietro di Bianco, Enric Martínez-Castignani, Piotr Micinski and Luis López Navarro.

Around Long live the mother activities have been organized at the Teatro Real, Berlanga Room, Museum of Romanticism and Regional Library of Madrid.

The performances will begin at 19.30 hours (Sundays, to 18.00 hours), will have a maximum capacity of 66% (in front of 75% authorized by the Community of Madrid) and there will be an empty seat interposed between each group of cohabitants.

Classical Radio, the RNE, will record the opera The theatrical conveniences and inconveniences - Long live the Mamma for subsequent broadcast in Spain and in the countries of the European Broadcasting Union (A CHILD).

Functions Long live the mother are sponsored by the Board of Friends of the Teatro Real.

This opera premiered in Naples in 1827, belonging to the first period of the prolific career of Gaetano Donizetti (1797-1848) and long forgotten, was rediscovered in the years 60, and since then it has captivated the audience. Your title, as serious as it is unattractive, in no way suggests the burlesque and critical plot of the libretto, the irony of the text and Donizetti's ability to mock the canons of serious opera and opera buffa that masterfully intertwines and to musically caricature the characters and situations, with spark, sharpness and great economy of means.

Title Live the Mother, coined by film director Helmut Käutner and repurposed, successfully, since then, immediately refers to the axis of the humorous plot of the opera, in which the most histrionic character is a matriarch, played by a baritone!that he is not satisfied with his singing daughter being the second woman Opera. And while fighting, with all their bad arts, to give it the prominence of a first woman, she aspires to have it herself, At whatever price, fighting for the interpretation of a role to suit.

Theatrical conveniences and inconveniences is, well, a critique of the excesses and tyranny of the divos, his pettiness, envies and power struggles; a parody of hierarchies within operatic productions, with the creators -composer and librettist- subordinate to the whims of the singers, dispositions of employers and arbitrariness of the public.

In the comic genre, the opera that looks in the mirror and laughs at its own world has occupied an important place, as would happen later with musicals and in a huge number of Hollywood films, what dreams have told, disappointments, ambitions and mirages of the world of celluloid and coated paper.

It is precisely that scintillating universe of Broadway and the modernizing fever of the years 50 that serves as inspiration to the production created by Laurent Pelly who also signs the wardrobe, with scenery Chantal Thomas, lighting Joel Adam.

Conceived as a flash-back, the plot unfolds in a parking built in a forever magical space that had previously been occupied by a provincial theater, unceremoniously demolished. The captivating and excessive characters that once shone on their stage parade through there, like specters filled with tenderness and poetry with the patina of time. A universe with clear reminiscences of the variety theater and the famous musical Follies, de Stephen Sondheim, that disguises self-criticism as fun, mockery, of reflexion, always with a hint of melancholy in the evocation of a past of lights and glitter, that the epidemic has moved even further, as Joan Matabosch recalls in her playbill article (included in the press kit).

WHO projecting Mom turns one hundred -directed by Carlos Saura- Y The night my mother killed my father -Work of Inés Paris-, two Spanish comedies with black overtones, around two mothers of highly addictive personalities for the viewer.

CONFERENCE Under the title Glass throats with concrete egos, Joaquin Turina, the best connoisseur of the history of the Royal Theater will take us on a journey through time to learn about the manias, gust, demands and whims of the divas who passed through the stage of the Plaza de Oriente.

IMPROVISATION WORKSHOPS As a tribute to the 19th century theater, the Museum proposes a fun activity for children between 8 Y 12 years graduated Coming out of the box. Improvising at the Museum. In her, participants, in addition to discovering some authors from the Spanish scene, learn techniques and tricks used on stage.