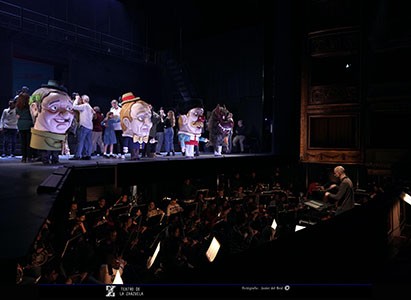 There are occasions that by themselves are authentic events. absolute gifts. This is the case of the work that is being presented these days at the Teatro de la Zarzuela: ‘La Dolores’. Premiered on this very stage in 1895, He has not gone up to it since June of 1937 –representations those in the middle of the Civil War– now more than 85 years. And not only that, but it has also rained, and a lot, since it rang and was last seen in public, almost two decades ago, a montage of the masterpiece by Tomás Bretón whose centenary of his death is celebrated this year. Therefore, for the artistic team and the unique cast, and for the fact that with this work Breton He finally achieves one of his big dreams, if not the most, which was none other than compose a purely Spanish opera, it is necessary, almost an obligation, go to the coliseum in Plazuela de Jovellanos to attend one of the 13 functions than the 27 January to 12 February they will resurrect this genuine monument of our heritage.

He intense drama of its libretto and the genius of the score round off a nearly perfect equation in which Guillermo García Calvo –house music director- deals with the musical direction, Y Amelia Ochandiano of the scenic.

As usual, the pit will be occupied by Community of Madrid Orchestra (Titular del Teatro), and the assembly counts, Likewise, with other big names in his artistic team. The scenery is Ricardo Sánchez Cuerda, your wardrobe Jesus Ruiz, lighting Juan Gomez Cornejo Y Michelangelo Bern, contemporary icon of the jota dance, so important in this work, is responsible for the choreography that throughout the work draws the very essence of the senses, that they are many and powerful.

They will, Besides, two deals those who will sing the work of Breton, as cool as complicated. It is not very common for the public to find some first-order distributions and absolute equilibrium like those presented by the Teatro de la Zarzuela in this Dolores, and that are integrated by the sopranos Session Hernández Y Carmen Solis, tenors Jorge de León Y Javier Palacios, baritones José Antonio López Y angel Ódena, mezzosoprano Maria Luisa Corbacho, soprano Milagros Martin, the bass Rubén Amoretti, bass-baritone Ihor Voievodin, tenors Javier Tomé Y Santiago Vidal, baritone Gerardo Bullón or the tenor Juan Noval Moro.

They will be accompanied on stage by Holder Choir Teatro de la Zarzuela and the White Voices Choir Sinan Kay, as well as 17 dancers-actors and three acrobats.

Sunday's show 5 February it will be recorded by Radio Clásica by RNE and issued in the near future.

The great example of Spanish poetry

'La Dolores' is, definitely, the great example of Spanish poetry. Premiered at the Teatro de la Zarzuela more than 125 years, he path of success of a Spanish opera like this was this, but sure. First he conquered the public and critics of the Zarzuela in Madrid and then he triumphed at the Tívoli, in Barcelona, city ​​where it remained as a repertoire work on different stages. yes, you have to bear in mind that only a year earlier the composer had become famous throughout the country as a zarzuela composer with a lyrical farce: ‘La Verbena de la Paloma’.

But nevertheless, On this occasion, Tomás Bretón led the public to contemplate and live a story with a rural theme that had already conquered the Spanish scene of the time.: 'La Dolores' Feliú and Codina; realistic work with a very strong dose of drama, that provided Bretón –who was also in charge of shaping the libretto– the chance to step on, singing in Spanish, the scenes of the lyrical temples of the country until then redoubts of European models.

Guillermo García Calvo points out that 'La Dolores' "is possibly the most important Spanish romantic opera, without a doubt at the height one of the best European operas of the late 19th century”.

In addition to the famous Jota, Breton composes an impressive wall of characters and emotions, with nothing less than five male singers, something unheard of in the repertoire, who fight for the love of the leading soprano. It is in music where Bretón takes us by the hand through this story.

Amelia Ochandiano, stands out on his part greatness, the light and the passion that it contains ‘La Dolores’: «It is a great Spanish opera. A brilliant score and passionate with a script full of nuances and dramatic games». That's what the stage manager says, which also emphasizes that the story of this girl, of the Dolores, is shown as a apparent frivolous game, festive and inconsequential «that we wanted to highlight in our scenic proposal, but with a sinister and cruel background that is almost impossible not to end in tragedy if it weren't for the fact that Dolores is not going to be easy prey, and above all because against the desire to love, to be loved and to give oneself to the other in body and soul, it is almost impossible to fight.