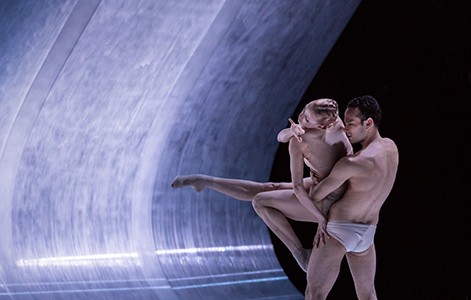 He Teatro Real will offer the next 20 Y 21 April only two dance performances offered by the Dresden Frankfurt Dance Company, with which the German company will debut on stage at the Royal. The program consists of a choice of four choreographies by its current artistic director, Jacopo Godani, also responsible for the scenography, lighting and costumes: Metamorphers, Echoes From a Restless Soul, Postgenoma Y Moto Perpetuo.

The sessions, with live music, will count with the participation of Ensemble Modern, modélica German winner formation of numerous awards and whose artistic restlessness has led them to collaborate in theater, video projects, chamber music and orchestral and, As this time, dance. They will be responsible for interpreting the String Quartet No. 4 Bartók Béla choreography for opening the program: Metamorphers.

Danish pianist Svjatoslav Korolev, artist associated with the company, will play Gaspard of the night (Ondine is the gallows) Ravel, for Echoes From a Restless Soul. The last two choreographies Postgenoma Y Moto Perpetuo they dance about music collective 48North, avant-garde composers of electronic and experimental music in Germany, who will perform his own works, live for the first and recorded, for the second.

Since joining 2015 as artistic director and choreographer Dresden Frankfurt Dance Company, Jacopo Godani He has managed to print new personality to a company of great technical preparation, under its guidelines, It has positioned itself among the most important in Europe in contemporary dance. The dancers have taken up the challenge of learning a different choreographic language, where virtuous and physical challenge intertwine to weave a repertoire that combines tradition with contemporary thought.

As a prelude to the functions, morning, Wednesday 18 of April, to 20.15 hours, the critic and writer Roger Salas discussed at a session approaches, This new way of understanding dance by betting Godani, both in its aesthetic orientation as musical experimentation and the use of scores not written for dance and ballet.