The Vienna Philharmonic and Daniel Barenboim at the Prague Spring 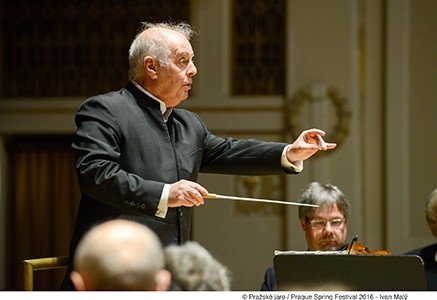 An exceptional combination, that of the director and pianist Daniel Barenboim in front of the Vienna Philharmonic Orchestra, will do the concert will start at the 72nd edition of the festival Prague Spring. Between 12 May and 2 June will pass through the current some of the most outstanding groups and soloists from the music scene Czech capital, including a significant presence of Spanish artists, as well as the celebration of its prestigious International Music Competition Prague Spring.

The festival devised, among others, by conductor Rafael Kubelík, has become one of the most respected classical music events in the world. This year's program will feature 45 concerts, a wide and varied offer, and the presence of artists of the stature of the violinist Maxim Vengerov, the pianist Alexander Lonquich or the conductors William Christie and Krysztof Penderecki. The latter will be in charge of the closing of the festival together with the Czech Radio Symphony Orchestra.

Among the international groups that will pass through this event, it stands out the Toronto Symphony Orchestra, the Orchestra of the Age of Enlightenment O the famous Orchester de Paris. This edition will also feature a performance by one of the brightest stars in contemporary opera., Diana Damrau, that she will visit Prague with her husband, the French baritone bass Nicolas Testé. Together they will tackle at the concert Dramatic Belcanto a selection of arias from the most famous operas of the 19th century.

Primavera de Praga has always shown great interest in Spanish music. Thus, last 21 February, director, Roman White, presented for the first time in Madrid the programming of Spanish accent. This successful cycle, that since its inception in 2016 has the support of Spanish Cultural Action (AC / E) thanks to the Program for the Internationalization of Spanish Culture (PIZZA) in the form of Mobility, has presented to the Czech public artists such as Javier Perianes or the project Spanish treasures in America, by Al Ayre Español.

This time, thanks to AC / E, there will be four groups that will play Spanish melodies from different musical genres: Rocío Márquez with Lorca (14 of May), universe Zapico (29 of May), EntreQuatre Guitar Quartet (22 of May) Y, Finally, set Antiqva form (30 of May). Throughout the history of the festival, there have been many Spanish artists who have passed through Prague: Rafael Frühbeck de Burgos, Nicanor Zabaleta or Alicia de Larrocha are some examples. This close relationship is also reflected in the Prague Spring International Music Competition, which receives several dozen entries from participants from Spanish-speaking countries. In the year 2016, Mario Martos Nieto, who had studied in Madrid and Salzburg, won third prize in trumpet discipline.

As for the Czech orchestras that will perform in this 72nd edition of Prague Spring, there is the Czech Philharmonic Orchestra with conductor Kristjan Järvi and with Lukáš Vondráček, Recently winner of the prestigious Queen Elizabeth of Brussels International Music Competition; one to Prague Symphony Orchestra FOK, that will have two directors with a promising future at the helm: Lukasz Borowicz y Johnathon Heyward. This time, the festival public will also be able to attend the world premiere of two works. The first, the new composition of Petr Wajsar, Only one song left, by the Berg Orchestra; while the second is about Circulation, from Jan Trojan, a novel work that uses the combination of live musicians, electroacoustic music and "robotic" players that will move among the audience. Both have been written commissioned by the festival. Likewise, in this appointment the 450 years of the composer's birth Claudio Monteverdi through from the concert of one of the leading Italian ensembles dedicated to the historical performance of old-style vocal music: The Compagnia del Madrigale.

By last, It is 2017 the 69th edition of the Prague Spring International Music Competition will take place with two disciplines: harpsichord (appearing only for the fifth time) and violin. The winners of both disciplines will receive a prize of 200 000 CZK (approximately 7.500 EUR) and they will perform at the next edition of the Prague Spring festival.