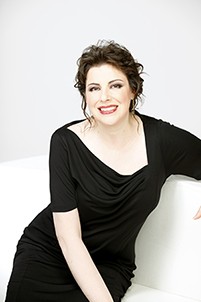 Hailed in the most famous opera houses as the great interpreter Rossini, Daniela Barcellona is, years, one of the most sought-after singers of the international scene. Her acting skills and her vocal virtuosity have been acclaimed throughout the world and their presence is habitual in the most famous festivals and lyrical scenes: Salzburg, BBC Proms, Metropolitan Opera House in New York, Bavarian State Opera de Munich, German Opera de Berlín, Semperoper Dresden, Royal Opera House, Opera National de París, Staatsoper Vienna ... From next 23 of June, and up 1 of July, will play in the Palau de les Arts in Valencia his famous leading role in Tancredi from Gioachino Rossini.

Considered by critics and audiences as the best Tancredi today, Daniela Barcellona made its debut in the role of Tancredi in 1999, Rossini Opera Festival in Pesaro, becoming, immediately, favorite star in Rossini's most famous festival.

Daniela Barcellona return to the scene of the Arts, with the teacher Roberto Abbado as musical director and production signed by Emilio Sagi for the Lausanne Opera and the Teatro Municipal in Santiago de Chile. the soprano Jessica Pratt (Amenaide), the tenor Yijie Shi (Argirio) and baritone Pietro Spagnoli (Orbazzano) complete the cast of this Rossini opera seria, which closes the season of the Valencian coliseum.