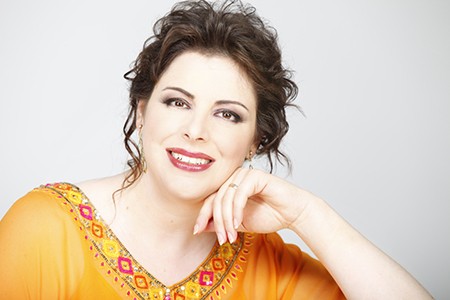 In full celebration Bicentenary of the Royal Theatre and when twentieth anniversary of its reopening, the great mezzosoprano Daniela Barcellona Madrid returns to the Coliseum to play Amneris in opera Aida, de Giuseppe Verdi.

Daniela Barcellona, considered by the highest authorities in Rossini Rossini mezzo as the best of the last twenty years, which marked a turning point in the history interpretive role of Tancredi, has decided to extend its current repertoire beyond belcanto: "I am following the natural development of the vocal and physical demands that characterize this moment of my life".

The famous Italian half, who moved the Valencian public for his vocal and scenic power in his debut of the role of Amneris, and with his memorable performance at the Arena di Verona, made the critics exclaim "Great Daniela Barcelona! We finally found it the Amneris areniana that we have been waiting for for years!”, returns to the Royal Theater, to interpret, once again, to the egyptian princess, after his extraordinary success at the last Salzburg Festival together with the Vienna Philharmonic and under the baton of maestro Riccardo Muti, who called her hours before her performance as Amneris on the famous stage of the Large festival hall, where, after a long drive, shone with its own light.

The following days 9, 15 Y 20 of March, we will have the opportunity to enjoy the performance of Daniela Barcellona at the Teatro Real in Madrid, under the musical direction of Nicola Luisotti, sharing the stage with soprano Lianna Haroutounian (Aida), the tenor Fabio Sartori (Radamés) and Ángel Ódena (Amonasro). Almost 300 artists (between soloists, choir, dancers, actors and orchestra), in the revised original production of 1998, signed by the Argentine Hugo de Ana.

Among his most immediate commitments, the premiere of Falstaff, en la State Opera Unter den Linden, with stage direction by Mario Martone and musical direction by Daniel Barenboim, Semiramide en la Bavarian State Opera, La Gioconda en la German Opera Berlin, the Small solemn mass at the Rossini Opera Festival and the Messa da Requiem in Verdi, with the Chicago Symphony Orchestra and Riccardo Muti. further, this march, It will be released his new recording project in which he plays the role of Arsace, a full recording Semiramide Rossini (Opera Rara), junto a Sir Mark Elder y la Orchestra of the Age of Enlightenment.