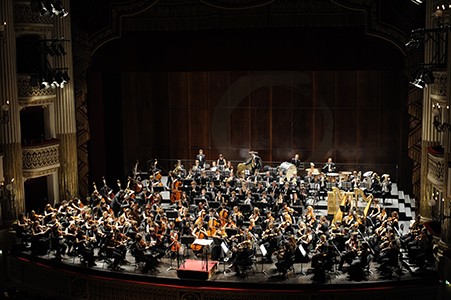 With a program that runs the most exquisite compositions of the nineteenth century, the Gustav Mahler Youth Orchestra Madrid reaches hand Ibermúsica two appointments the next day 20 Y 21 of March. Both concerts are scheduled within the tour celebrating the 30 years of the group and will also for the Palau de la Musica in Barcelona cycle BCN Classics (day 26 of March) and Zaragoza (day 27 of March, audience).

The project began as a dream in the mind of director Claudio Abbado It has become today the most outstanding youth orchestra at the continental level and has 31 Spanish musicians in its ranks, the country that brings more members. Under the baton of Daniel Harding, in his performances in Spain, They will also be accompanied by the extraordinary German baritone Christian Gerhaher.

With three decades behind, la Gustav Mahler Youth Orchestra (GMJO) It is considered the ideal basis for new talent in Europe have their first major orchestral experience. The rigorous selection of the more than two thousand applications received each year, as well as his impeccable artistic work, They have made this group one of the most common at festivals such as Lucerne, Salzburg or the BBC Proms. GMJO debuted at Ibermúsica in 1994 under the orders of Abbado. Since then, public cycle has frequently been enjoying this youth orchestra.

In the first of the performances in Madrid will address Five Pieces for Orchestra, op.16, de Schoenberg, dated work 1909 for this great revolutionary music; Y The summer nights, Berlioz, inspired by a series of poems by Théophile Gautier. It will close the program symphony No.. 2 in C major, op.61, Schumann. The program 21 March includes Altenberg Lieder, from Berg, disciple of Schoenberg; the opera Alfonso and Estrella, from Schubert; Y, by last, the symphony No.5 "Fantastic" according to the composer himself called perceived the whole essence of compositiva Bruckner.

Founded in Vienna in the season 1986/1987 initiative of Claudio Abbado, It is considered one of the leading youth orchestras in the world and was awarded by the European Cultural Foundation 2007. In addition to supporting young musicians in their work, Abbado showed special interest in promoting that young Austrians could touch with his colleagues in the former socialist republics of Czechoslovakia and Hungary. In this way, the group was the first international youth orchestra offered open auditions in the countries of the former Eastern Bloc. In 1992, Orchestra musicians opened up 26 years, from across Europe, with this exceptional share of Spanish.

His repertoire ranges from touring classical music to contemporary, with special emphasis on the great symphonic works of the romantic periods and late romantic. The high artistic level and international recognition of the orchestra have attracted many of the most important conductors and soloists to collaborate with it. In addition to Abbado, David Afkham, Herbert Blomstedt, Pierre Boulez, Myung-Whun Chung, Sir Colin Davis, Christoph Eschenbach, Iván Fischer, Daniele Gatti, Bernard Haitink, Paavo Järvi, Mariss Jansons, Philippe Jordan O Vladimir Jurowski they have led since its founding.

Many former members are now part of the major European orchestras, some of them in positions of their respective solo instruments. In 2012 It was announced a project of intense collaboration with the prestigious Staatskapelle Dresden, It is including concerts and projects with the participation of members of both groups. The Gustav Mahler Youth Orchestra was appointed UNICEF Ambassador in Austria.

In 2005 He opened the La Scala season, directing a new production Idomeneo. Since then he has returned every season to lead large productions Falstaff, which opened the celebrations Verdi La Scala in 2013. His operatic experience includes Another twist Y Wozzeck, in Covent Garden; Ariadne auf Naxos, Don Giovanni Y Le nozze di Figaro, at the Salzburg Festival with the Vienna Philharmonic.

In 2002 He was named Chevalier de l'Ordre des Arts et des Lettres by the French government. Harding was presented for the first time in Spain hand Ibermúsica in 1998, con la Mahler Chamber Orchestra. He has returned several times with that group, and the head of the London Symphony. This is the first time that addresses the GMJO in the cycle Ibermúsica.

Baritone Christian Gerhaher was a student of Paul Kuen and Raimund Grumbach at the Opera School of the Academy of Music in Munich. He studied interpretation lied Friedemann Berger with pianist Gerold Huber and, habitual companion in his recitals. While he completing his medical studies, He perfected his vocal training in master classes given by Dietrich Fischer-Dieskau, Elisabeth Schwarzkopf e Inge Borkh. Gerhaher had not returned after his debut Ibermúsica 2009.

In addition to its core business as a concert and recital, often also it addresses the operatic stage. He has received several awards, including the Laurence Olivier Award and the Theater Award "Der Faust". In season 2015/2016 He debuted in the role of Wozzeck, Opera in Zurich, by Andreas Homoki staged and directed by Fabio Luisi. He played the role of Pelleas twice, with the Berliner Philharmoniker and stage director Peter Sellars- and in concert version with the London Symphony Orchestra, both under the direction of Simon Rattle.

Es meaningsta exclusive Sony Music. He recorded, con Gerold Huber, ciclos de Schumann, Schubert and other series of Songs. His most recent live recording, headscarf (BRmedia), It contains songs by Beethoven, Britten and Haydn. He has also recorded solo albums. In 2015 It was released in CD format his second opera recital: Mozart arias, con la free Burger Baroque Orchestra; album that was presented on tour with concerts in Barcelona, Stockholm, Colonia, Vienna and New York, among other cities. His highly acclaimed interpretation of Songs, also with Huber, He has earned him numerous awards. The CD night Violins He won a Classical Music Award 2015, in the category of "vocal Soloist".

Schoenberg Five Pieces for Orchestra
Berlioz The summer nights
Schumann symphony No.. 2 in C Major, on. 6