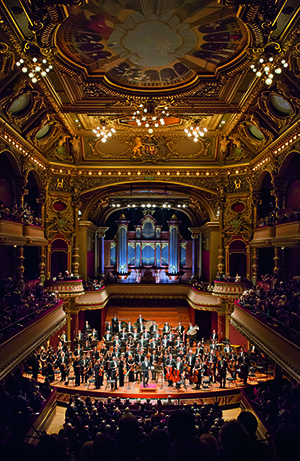 The Orchestre de la Suisse Romande between Beethoven, Schubert and Mahler, in Ibermúsica
The Orchestre de la Suisse Romande It is presented to the public Ibermúsica for the eighth time with two concerts to be held the next day 31 January 1 February. Two of the most famous compositions Beethoven star in the program of the first performance: Piano Concerto No.. 4, with Argentine pianist Nelson Goerner, and the fifth Symphony. While, in the second of dating, both under the orders of newly appointed Chief Conductor, Jonathan Nott, will address the symphony No.. 5, from Schubert, Y the symphony No.. 1 "Titan", from Mahler.

He concert No.. 4 in G major Beethoven was composed between the years 1802 Y 1806, during one of the most decisive stages in the creative and artistic evolution musician Bonn. "For many, It is the most perfect, the staff, the most tender of all Beethoven piano concertos ", He wrote this piece Robbins Landon American musicologist. In the same period also saw the light the second of the works that interpret the Geneva group, symphony No.. 5 in the lower, completed in 1808, whose dose of vehemence and dramatic tension have shaken the public since. In the fifth Symphony Schubert-the first of the works that will be heard in the second performance of the OSR- the musical legacy of his predecessors seen, but also the unique and personal touches of Austrian composer. As is the case with the first Symphony Mahler, a youthful work where the defining elements of any subsequent production were reflected.

It is will be the eighth time the Swiss group visit Ibermúsica. Precisely, in his last concert 2011 He debuted at Ibermúsica pianist Nelson Goerner, now returns to accompany them. The 47th season Ibermúsica, in which this appearance fits, began last 24 June with the opening concert of the Vienna Philharmonic. Since then, and until May 2017, Programmed Ibermúsica 25 concerts 12 of the best orchestras in the world. This is the brand that bears nearly half a century bringing the best music to Spain. The institution, Founded by Alfonso Aijón and co-directed by Llorenç Caballero now, It has evolved in line with the times and has managed to preserve the interest in classical music.

Founded in 1918 for which he was its director until 1967, Ernest Ansermet, It currently comprises 112 musicians. Its activities include concerts in Geneva and Lausanne, Annual Benefit Concert of the United Nations and opera performances at the Grand Théâtre in Geneva. His current group of directors is formed by Jonathan Nott, who assumed the post of Director Titular this season, and Japanese Kazuki Yamada as Principal Guest. Along its history, They have been at the forefront of this group as directors Paul Kletzki, Wolfgang Sawallisch, Horst Stein, Armin Jordan, Fabio Luisi, Pinchas Steinberg, Marek Janowski O Neeme Järvi.

The group has actively contributed to the history of music, Backed by contemporary composers and new orchestral music, especially developed by Swiss authors. Their concerts reach an audience of millions of people worldwide. They have made recordings, many of them awarded, with Decca Classics and a dozen other record companies. In recent years, the orchestra has developed a privileged partnership with PentaTone. Together with the latter label has released his latest album with pieces of Roussel, Debussy y Poulenc, on sale since last September.

His international tours have taken her to perform in major concert halls in Europe, Asia and Latin. In July 2014 They staged a triumphant tour to Japan (Suntory Hall) and Seoul; and in February 2015 they undertook a US tour. Likewise, the OSR has also been invited to participate in numerous festivals.

The newly appointed Head of the Orchestre de la Suisse Romande director studied music at the University of Cambridge, Royal Northern College of Music in Manchester and conducting in London. He launched his career in the opera houses of Frankfurt and Wiesbaden directing all the major operatic repertoire. He has been Director of the Lucerne Symphony Orchestra and Chief Conductor of the Ensemble Intercontemporain. In the year 2000, He assumed the position of Chief Conductor of Bamberger Symphoniker. In 2009 He received the Midem Award for Best Recording for Symphony symphony No.. 9 Mahler.

Since April 2014 is Chief Conductor of the Symphony Tokyo. Bamberger Symphoniker with has performed on tour in the United States, South America and Asia; as well as at festivals in Salzburg, Edinburgh, Lucerna y los BBC Proms. More recently, He has acted on stage in China, Spain, Belgium, Vienna, Prague, Paris and Baden-Baden. Besides his work as a conductor, Nott has created a program of resident artists and is also founder of the International Mahler Competition, which is held every three years and Gustavo Dudamel won first prize.

He has been guest conductor of renowned orchestras, as the Berlin Philharmonics, Vienna, New York and Los Angeles; Staatskapelle Dresden o Chicago Symphony. During the season 2014/15, Nott worked with the Royal Concertgebouw Orchestra, National Academy of Santa Cecilia y Wiener Symphoniker. It has been Conductor and Artistic Director of the Youth Philharmonic Orchestra of Germany Director since 2014. He led the Gustav Mahler Youth Orchestra during its tour 2015, parallel to their teaching at conservatories in Lucerne and Karlsruhe. Likewise, He has recorded the complete orchestral works of Ligeti, con la Berliner Philharmoniker (Teldec); Bruckner works, Schubert, Stravinsky and the complete symphonies of Mahler with Bamberger Symphoniker (Tudor).

Nelson Goerner was born in Argentina and studied with Jorge Garrubba, Juan Carlos Arabian y Carmen Scalcione. In 1986 She debuted at the Teatro Colon Buenos Aires Philharmonic. Later, he moved to Europe and, in 1990, after his studies with Maria Tipo, won first prize in the Geneva International Competition. Since then, Goerner has given recitals worldwide, in venues such as the Concertgebouw (Amsterdam), Colon Theatre (Buenos Aires), National Music Auditorium (Madrid), Wigmore Hall y South Bank Centre (London) o Salle Gaveau (Paris). He has been invited by prestigious festivals such as Verbier, Salzburg, Edinburgh, La Roque d’Anthéron, Toulouse, Schleswig-Holstein, Festival Chopin y BBC Proms.

This season will offer a series of four recitals at the Wigmore Hall, as well as other performances in Paris, Lyon, Toulouse, Geneva, Buenos Aires and Shanghai; plus debut with the Hallé orchestras Manchester, The Netherlands Philharmonic and Scottish Chamber Orchestra. His discography includes works by Chopin (EMI); Rachmaninoff, Liszt and Schumann (Cascavelle), Y fantasy India de Busoni. His most recent recording, with works by Debussy, It has been awarded the Diapason d'or. He received the Konex Platinum Award and the Music Critics Association of Argentina he distinguished himself as best Argentine solo.