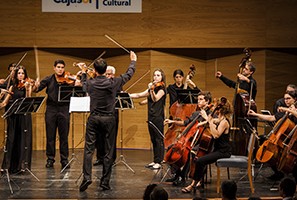 Aranjuez Ancient Music It brings together in one weekend to several renowned performers who have already made their mark in previous editions of the festival. Saturday, 21 of May, he Ludovice Lisboa assembly, with soprano Maria Hinojosa, We propose a music concert with Spanish influence on the soirees of the Portuguese court early eighteenth century. Before the concert is possible to participate, optionally, on a tour of the city, organized by the Civic Forum, that part of the bull ring and culminates in the appended constructions giving Palacio service same. Aranjuez unveiled experts on the history and curiosities of these places, where we will listen to musicians.

On Sunday, 22 of May, return, after their success in last year's edition, the soloists of the Orquesta Barroca de Sevilla (OBS) with an extraordinary concert, Custom Madrid. This time come with a program of sacred music in the Europe of Carlos III, with alternating works by Spanish and European composers culminating with the gorgeous glory Händel. They will be accompanied by soprano Marta Almajano, historical interpreter who returns once more to his house, Early Music Festival Aranjuez.

Saturday 21 of May. Concert: Maria Hinojosa & Ludovice Ensemble + (optional) guided visit: Plaza de Toros the Patio de Caballeros The festival continues its commitment to combine music and scenery. Saturday, from 17:30 a 19:30 hours, it is possible to point us to tour. This second tour organized by the Civic Forum of the Plaza de Toros, built in 1796 in order of Carlos IV and declared Historic-Artistic. In 1809 It was destroyed by fire, reconstruyéndose 20 years later by Fernando VII, who gave the City. It is one of the three bullrings eighteenth century still stand and use, next to the Maestranza in Seville and the Plaza de Ronda. Houses inside the Museo Taurino, which allows a tour inside the building, In addition to observing various garments, utensils and posters of important masters of bullfighting. The walk continues along the Corrala of Bellotero (Stuart street), Corrala of Alvarez and Hostal Castilla (Andalusia road), Patio de Caballeros and Crafts (Couples Square), to finish in the Chapel Royal Palace half an hour before the concert.

El Ludovice Ensemble (specializing in the repertoire of vocal and instrumental chamber group the XVII and XVIII, based in Lisbon) It is made up Fernando Miguel Jalôto (Harpsichord y direction), Diana Vinagre the violoncello and Pablo Zapico with tiorba. In the El Tajo festival program. Music for the Courts of Lisbon and Madrid that will offer us the 20 hours in the palace chapel, accompanied by the Catalan soprano Maria Hinojosa Montenegro, we can hear sonatas José Antonio Carlos de Seixas or Giovanni Bononcini, and cantatas Domenico Scarlatti, André da Costa, Jaime de la Tea and Sagau or Emanuele D'Astorga. - Sunday, 22 of May. Concert commemorating the tercentenary of Carlos III: Soloists from the Baroque Orchestra of Seville (OBS), Marta Almajano the palace chapel hosts on Sunday, to 19 hours, -encargo an extraordinary concert of the Community of Madrid to commemorate the 300 birthday of Carlos III- led by the soloists of the OBS (National Music Award 2011), Aragon accompanied by soprano Marta Almajano. The program, called Sacred Music in the Europe of Carlos III, brings us pieces of Domenico Scarlatti, Charles Avison, Juan Francés de Iribarren, Antonio Caldara Y Antoni Lliteres Carrió. as colophon, We hear the unmistakable Gloria Handel. Agenda of upcoming concerts: Saturday, 28 of May. Bodega del Real Cortijo. Carlos III, 1782. Tour and concert at the winery with tasting: Seldom Sene (flute quintet) The cellar of Carlos III (Historic-artistic monument from 1983) covers more than half a kilometer under the Real Cortijo de San Isidro. The visit begins in the monumental stone doorway of Colmenar, and then its two branches will travel, flanked by 200 alcoves where they age the wines. The concert, by the Dutch quintet Seldom Sene (more than 50 flutes on a tour 500 Years of Music), It will be held in the cave breeding. Upon completion of the wines will be tasted, accompanied by an appetizer.

Sunday, 29 of May. Concert: Fahmi Alqhai & Rami Alqhai. The Spirit of FigA unique concert or two violas da gamba by the brothers Alqhai awaits us in the Chapel. The viola da gamba was the queen of instruments camera for 250 years. His journey began as part of the baggage of the Borgia popes from his native Valencia to universal Rome, back in the fifteenth century. During those two and a half centuries, the espí- Ritu Viola traveled throughout Europe and, with the, virtuosos of the instrument were making their mark in their repertoire: Tobias Hume In England, Marin Marais Y Forqueray in France, and Schaffrath school in Berlin and Prussia. - Sunday, 12 of June. Concert: Maria Espada, María Ferré Y Amelia Way + (optional) guided visit: walk in the Aranjuez of Carlos III Carlos III left a deep imprint on the waterfront architecture, as we shall see in this tour. We depart from the palace, to visit Examples of urban development prompted the monarch, to the Royal Theater that bears his name. There the concert closing the festival is celebrated, by the renowned soprano María Espada, accompanied by the theorbo of María Ferré viola da gamba is the path of Amélie. Together they will offer a selection of jewelry six hundred italiano.