The Symphony Orchestra of Castilla and Leon in Ibermúsica 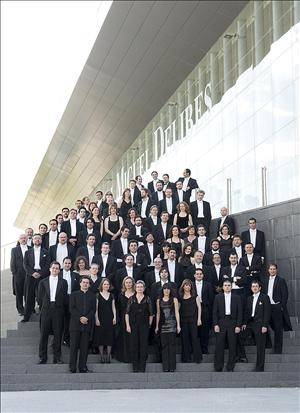 The concert program will begin with the world premiere of Symphony No.4 'July', from Jesús Rueda. Summer is for this composer "A whole host of fertile and productive sensations", and it was this creative capacity of this time, donde Rueda encontró la inspiración para crear ‘July’. In his own words, "It is divided into three movements without interruption" Y It is dedicated to the summer period incarnates "The dream of the possibility and fullness". "If anything, this work represents me is that it represents everything that has meaning for me from the beginning", explains Rueda.

The concert will continue the 'Violin Concerto, on. 82’, from Glazunov, and ballet 'Firebird', Stravinsky, both pieces performed in the subscription concert 3 the OSCyL. Glazunov is an important figure in the transition between the nineteenth and twentieth centuries in Russia. Concerto in A minor Violin was compound 1904, in St. Petersburg and in the summer retreat of Glazunov in Oserki. Mischa Elman was the soloist in the premiere, which he took place in London, he 17 October 1905. The work is a good example of the tilt Glazunov felt by both Russian and Western themes, these have, indeed, distant echoes of Russian folk melodies, but the way of its development is more intricate than in most of Russian symphonic music of the nineteenth century.

By last, 'The Firebird' is a ballet 1910, from Igor Stravinsky based on Russian folk tales of the magical bird of gloss that is both a blessing and a curse to its captor. The music was premiered as a ballet with Diaghilev's Ballets Russes, the first of his productions with music specially composed for them. Originally the music was going to be written by the Russian composer Anatoli Liádov; but because of the delay to start work, Diaghilev transferred the commission to Stravinsky who was then only 28 years. The ballet has historical significance, not only as the revelation of, sino también por el inicio de la colaboración entre Diághilev y Stravinski que también producirían’ Petrushka y La consagración de la primavera’.