The Symphony Orchestra of Castilla and Leon in Valladolid Seminci 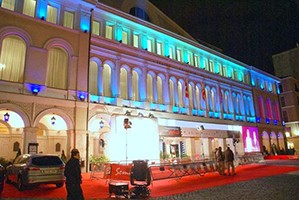 The Symphony Orchestra of Castilla and Leon and the Seminci collaborate for the third year in a special concert, scheduled by the Ministry of Culture and Tourism in the auditorium Miguel Delibes, for the next one 28 October. Tickets go on sale this Saturday at a price ranging between 14 and the 22 euros.

The Seminci (Seminci) will offer for the third consecutive year an extraordinary concert, in which the Symphony Orchestra of Castilla and Leon (OSCyL) perform live the original score for the film Nosferatu, a symphony of horror (Nosferatu, a Symphony of Horror), the classic silent film directed by Friedrich Wilhelm Murnau in the year 1922.

The concert, scheduled at the Miguel Delibes Cultural Centre by the Ministry of Culture and Tourism of the Junta de Castilla y León, in collaboration with the festival, will take place on 28 October. Under the baton of Director David Hernando Rico, OSCyL play the music he composed Hans Erdmann for the Berlin premiere 4 March 1922. The score was rebuilt by Berndt Heller for the restoration of the film by Luciano Berriatúa in 2005 Y 2006 para la Fundación Friedrich Wilhelm Murnau.

The conductor David Hernando Rico address the OSCyL in his hometown, where he began studying piano at the conservatory. He later moved to Slovakia, where he studied conducting at the University of Music in Bratislava. Is, Besides, the founder of the Bratislava Symphony Orchestra, with which he has performed more than 500 recordings, especially film music soundtracks with composers like Roque Baños, Joan Valent, Pascal Gaigne, Hans Zimmer, Brian Tyler, Lorne Balfe O Michel Legrand.

This will be the third consecutive collaboration with OSCyL Seminci, after the concerts in the edition 59 the Seminci, when he played the music of Snow White (Pablo Berger) simultaneously with the projection, and the next year, in which the orchestra played the soundtrack of The Battleship Potemkin, coinciding with the 90 anniversary of the film directed by Sergei M. Eisenstein.

With this concert, Seminci remains committed to moving the audience the experience of attending a screening with live music as it did with Napoleon, from Abel Gance, with Carmine Coppola as a conductor (30 Week); The cursed village, Florian Rey, with José Nieto in front of the orchestra (31 Week), or the most recent, in collaboration with the OSCyL: metropolis, from Fritz Lang (53 Week) or The Assassination of the Duke of Guise, from André Calmettes Y Charles Le Bargy, considered the first film to have its own soundtrack (54 Week).