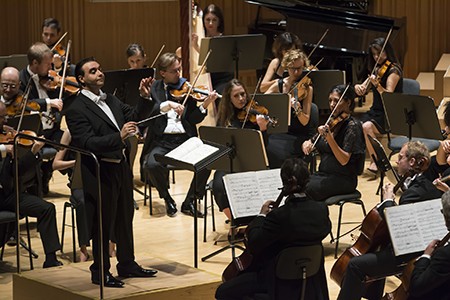 The program, says the teacher alcoyano, about three essential figures are axed: the composer and painter castellonense, on the centenary of his birth, French Impressionist, who are commemorated 100 years after his death (two days after it grew Salvador), Y Manuel de Falla, whose work had special esteem the author of 'La Filla del Rei Barbut'.

Matilde Salvador, Bernàcer offers a selection of songs as a sign of an important part of his work, focused on music for voice and piano or orchestra, both poems in Valencia and Castilian: 'The Nightingale and the Rose', 'Feeling' (Carmen Conde on text), 'Song candle'; 'Valencia' (on text of Lope de Vega), 'Song of sorrow' and 'happy song', These last two orchestrated by Vicente Asencio, husband Salvador.

The Valencian soprano Carmen Romeu puts his voice to this tribute to the composer castellonense, which means in turn his reunion with Les Arts audiences after his work in 'La Bohème', Puccini, and 'Idomeneo', Mozart.

Will follow 'Tributes', Manuel de Falla, a figure of great influence on the musical production of Salvador. Cadiz genius meets in this 'suite' pieces written earlier and which each movement is a tribute to different musicians: Enrique Fernandez Arbós, Claude Debussy, Paul Dukas y Felipe Pedrell.

Jordi Bernàcer and OCV closed down the concert with 'La mer', Debussy, the first composition of French impressionist who played the starting lineup of Les Arts under the baton of Lorin Maazel and also one of the works that the OCV made his first international performance at the Teatro La Fenice in Venice.

The Palau de les Arts recalls that the "Homenatges" concert is part of the musical range of the preseason with popular prices. The towns of this show range from 10 Y 20 euros.