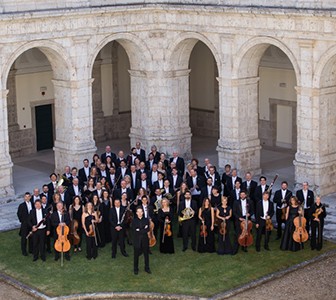 The Socioeducativa Area Symphony Orchestra of Castilla and Leon, with the director Alejandro Garrido, Saturday presents an innovative proposal works around Mozart y Strainsky, to be held in the emblematic room Museo Nacional del Prado, on the occasion of the closure of the acts of its Bicentennial. This proposal is part of the Iberian Orchestral Project, promoted by the Junta de Castilla y León.

Iberian Orchestral Project (PIO) entrepreneurship and leadership beginning in the year 2017 as a unique initiative of the Socioeducativa Area Castile and León Symphony Orchestra, with the collaboration of the Centro Cultural Miguel Delibes, in which young musicians from Andorra involved, Spain and Portugal selected by major groups of young musicians from the three countries. A being a multidisciplinary team three dancers from the Professional School of Dance of Castilla y Leon and the young Portuguese baritone add, Frederico de Vasconcelos, along with a dozen young musicians.

Secretary General of Culture and Tourism of the Junta de Castilla y León, Gregorio Muñoz Abad, He has been present in the presentation of the program designed to mark the closing ceremony of the bicentennial of the Museum of the Prado. The repertoire PIO presented in two performances at the art gallery next Saturday, 14 from December, It consists of the following parts: 'Madamina, this is the catalog ' (Mozart aria for baritone), ‘Andante’ (Stravinski), 'Ah, come to the window' (Mozart aria for baritone), ‘X14’ (Alejandro Garrido) y 'Open a little' those ochhi ' (Ara for baritone Mozart), under the direction of Alejandro Garrido.

During the morning trials will open place in three different spaces of the Museum of the Prado, and in the evening they will surprise the visiting public with two performances in an emblematic room of the permanent collection of the Museum. During the day on Saturday (also the days 12, 13 Y 15 from December) the public can enjoy an audiovisual show on the street it includes live music and play of light, in tribute to the institution through a tour of his works.

Audiovisual intervention will take place on the facade of Goya with the artistic collaboration of Daniel Canogar. The objectives of the PIO are innovation, disruption, dare, commitment, training, leadership, multiculturalism, territory. In the context of OSCyL, Iberian Orchestral Project, margin to influence the artistic high-level training, It expands with training to prepare young people for the future, responding to the high professionalism of the sector and a highly competitive environment.

also influences provide a different view of musical expression, body and staging. Actually, musician becomes a figure interdisciplinary: a dancer, musician and actor at the same time, taking the view that through the interdisciplinary, musical performance is enhanced, where young musicians perform without sheet music.

In the Iberian Orchestral Project also actively collaborates People Foundation, thanks to the involvement of up 60 People with Disabilities Foundation. further, costumes designed by Nina Cruz, and they use in their performances, It has been made in sweatshops Foundation People in Guardo (Palencia). The Foundation aims to promote prevention, care and inclusion of people with intellectual disabilities and provide services that improve their quality of life and their families.

Iberian Orchestral Project has performed in these three years looking for new venues in cities such as Madrid, Lisbon and Valladolid.