Resounds percussion at the National Auditorium 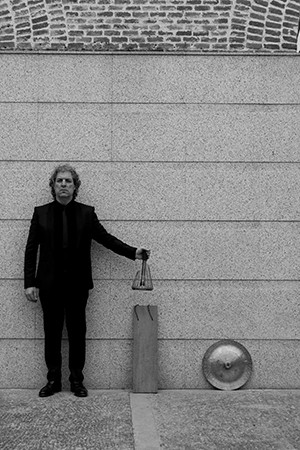 As befits the format White card, Gabriel himself has chosen programming Erkoreka concert, It is including only percussion Ru Tchou (the Ascent of the Sun), work of 1975 British composer Michael Finnissy, master Erkoreka, who plays William. the percussion quartet will also be offered Wildcat, work commissioned to Erkoreka in 2003 by Juanjo Guillem since its formation, Neopercusión, and it was premiered at the Festival Aujourd'hui Musiques in Perpignan. Rafa Gálvez, solo percussion member Neopercusión ONE and will join Guillem Veni Creator (2005), also Erkoreka, for SATB Chamber Choir, body and 2 percussionists.

Juanjo Guillem This concert “a great opportunity to bring the public from the National Auditorium percussion Erkoreka creations and some of the composers who have influenced their music and what is even more valuable, do so within the framework of a series of concerts dedicated to great composers that highlights the value of this creator. -continued all conditions are Guillem-, to provide a great concert pieces for solo percussion, organ and percussion Gabriel Erkoreka whose music is characterized by use of timbre and color through the unconventional harmony and a deep fascination natural phenomena”.

The Neopercusión radical militant group is an ensemble of contemporary music, creator of innovative musical experiences that integrates resources regularly as new technologies, the video, new stage formats and a variety of musical styles: contemporary, intuitive, performance, contemporary musical theater, classical, Opera, free improvisation, ethnic, experimental electronic, fusion, jazz, film and live music, etc. Aware that "we are what we touch" [Juanjo Guillem dixit], Neopercusión takes 24 years promoting and disseminating the expression of this through the sounds and the current musical thought.