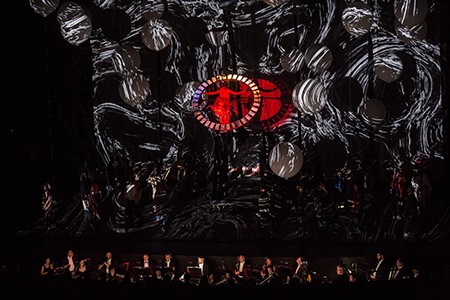 The Musical Fortnight San Sebastián closes its 79 edition a symphony concert, second featuring the WDR Sinfonieorchester Cologne in this issue. German Orchestra Today will perform "Requiem" by Berlioz accompanied by the Orfeón Donostiarra and tenor Maximilian Schmitt, under the direction of Jukka-Pekka Saraste. This concert ended an edition that another year has passed 90 proposals, between concerts and parallel activities.

He Kursaal auditorium has been, Also in this issue, one of the key areas of the Musical Fortnight. Auditorium registered 6 full absolute and it has reached a 91% occupation. The Total box office amounts to 952.000 gross euros, As for the number of spectators, about 37.000 assistants They enjoyed the various proposals of this 79 edition.

Among the proposals scheduled in the Auditorium, They highlight the successes of the two representations of "The creation" La Fura dels Baus (2 Y 3 of August) which opened the festival with all tickets sold out. Also they saw the full house concert Rotterdam Philharmonic Orchestra (24 of August), the one offered by the Budapest Festival Orchestra and the Orfeón Donostiarra (27 of August) and the premiere of “Amoria”, the latest project of the pianists Katia and Marielle Labèque, reviewing 500 years of Basque music and gathers around the duo to a large group of Basque musicians. Also Saturday concert of WDR Sinfonieorchester Cologne and Orfeón Donostiarra with which closes the 79 edition has hung the sign sold out.

The second stage proposal of this issue led to the recovery of a title in Rossini 150 anniversary of his death: the days 11 Y 13 of August, the Musical Fortnight presented the opera "The Italian in Algiers" in a co-production of the Fortnight itself, the Teatro Colon in Buenos Aires and the Summer Festival of San Lorenzo de El Escorial. The new version of Joan Anton rechi moved the action to the early 40 and he had a kind of representation within a representation tinged magazine.

He Kursaal auditorium has been, Likewise, a place of reunion, celebrations and moments to remember. Saturday 18 August the Euskadi Symphony Orchestra and the Choir Andra Mari They opened the symphonic cycle this year under the direction of Christian Zacharias, a regular at the Directors' Fortnight returning in his dual role of pianist and conductor. He 22 of August, the NDR Elbe Philharmonic Orchestra de Hamburgo San Sebastián again thirty-five years after his first and only performance at the festival; under the direction of its principal guest conductor, Krzysztof Urbanski, at the end of the concert the NDR surprised the audience with the interpretation of "Agur Jaunak". The Rotterdam Philharmonic Orchestra (24 of August), with his head Yannick Nezet-Seguin, now says goodbye to what has been his orchestra in the last ten years, he was reunited with the public Fortnight in the context of the international tour that celebrates its centenary; Fortnight wanted to join the celebration with the interpretation of "Zorionak Zuri", and its equivalent in Dutch, by the Escolanía Easo. also Budapest Festival Orchestra, He offered two concerts the days 27 Y 29 of August, It is a usual orchestra in the Directors' Fortnight, She not in vain revisited the festival for the fifth time in the last decade; in the first of two concerts, director, Ivan Fischer, thanked the host of the public with the original version of the "Hungarian Dance No. 4" by Brahms, who they put voice to the musicians of the orchestra. The show “Amoria” It was a successful collection of Basque music has meant the meeting on the stage of the Labèque sisters with Basque musicians like Carlos Mena countertenor or Hegiak group and Escolanía Easo; This first project of this group coral pianists of his collaboration with Sir John Eliot Gardiner in the Directors' Fortnight 2016: Katia Labèque narrated in the presentation of "Amoria" it was he who told them about the Escolanía Easo, "The best children's choir in the world", in the words of British director. This story confirms the relevance of the Fortnight as a meeting point between local and international artists choirs.

He Victoria Eugenia Theater this year hosted three very different dating each other: a recital by the French pianist Alexandre Tharaud, with works by Couperin, Debussy y Satie (6 of August); the concert "Celtic Dialogues" in which Jordi Savall and Carlos Núñez They delved into Celtic roots of traditional music of Scotland, Ireland, Euskadi and Galicia (20 of August); and dance show "The barbarians nights" of the Dance Company Hervé Koubi, an exercise fusion of different cultures that have populated the Mediterranean area throughout the centuries (28 of August). Both "Dialogues Célticos" and "Les Nuits barbares" deserved a great reception by the public, sellout for both shows.

In 2019 the Musical Fortnight San Sebastián reaches its edition 80. To celebrate, It has been working on designing a program that will include, among others, concerts by the London Philharmonic Orchestra, under the direction of Juanjo Mena and the pianist Javier Perianes, and the Orchester de Paris and the Orfeón Donostiarra, directed by Daniel Harding. The opera chosen for its representation in the next edition of Directors' Fortnight's "Madama Butterfly", Puccini, in a new co-production with the Summer Festival of San Lorenzo de El Escorial.