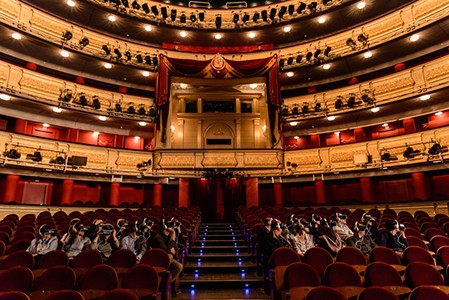 Samsung and the Teatro Real They have launched a new partnership agreement 3 year intended to provide new cultural experiences through technology. Through this agreement, Samsung will offer its expertise and leadership in digital innovation to jointly develop projects in areas such as virtual reality, production and distribution of content in 4K or disclosure of the opera in schools, in addition to providing technological resources and devices. "This partnership with the Royal Theater confirms our commitment to lead the digital transformation of the most important cultural institutions in our country and to make culture more accessible to all audiences. In this case, by Teatro Real VR, we provide the operas and shows users highly relevant,” Celestino Garcia says, corporate vice president of Samsung Spain ",

"The important technological bet Teatro Real has placed us today as a leader in the use of new technologies for the dissemination of the opera. In this ambit, will mean a great advance various projects such as the development of an application and content generation virtual reality, thanks to the important collaboration with Samsung will allow us to approach the Royal Theater productions in a unique way. ", says Ignacio García-Belenguer Laita, CEO of Royal Theater.

Samsung this new project will offer new cultural experiences through technology, and in this case has a strong informative nature to bring opera to new audiences both inside and outside the Royal Theater.

'Teatro Real VR', Opera enjoy and discover the secrets of the Royal Theater through virtual reality

The first project developed under this agreement, It is the new virtual reality application of the Royal Theater with contents that include fragments from operas and documentary programming pieces to discover secrets, curiosities and corners of the theater and theater performance

A) Yes, this application will be released containing the opera ‘Madama Butterfly’ recently at the Royal Theater, which will experience firsthand the tragic history of the geisha Cio Cio San through Samsung Gear VR. further, Content will be available on "A Walk in the theater" to go with the spaces that the public can not access as the inside of the stage, the tailor shop and props, The moat, rehearsal rooms and enjoy the iconic facade of the Teatro Real.

periodically, they will be generated new content for this app as the next opera "La Boheme" or the second content backstage, "The Real Jewel", you will discover the scenic theater box. Over the next year 2018 It is planned to record several operas programming and discovering other secrets of the Royal Theater as the orchestra or choir.

The "Teatro Real VR" application will soon be available for free worldwide by allowing Oculus enjoy this cultural experience from anywhere. Likewise, at the Royal Theater itself and you can live this experience, where they have installed two points equipped with Samsung Gear VR available to visitors.

In addition to the joint development of content and projects, As part of this collaboration agreement, betting jointly by digitizing the Teatro Real, for what Samsung will provide signage displays in different parts of the historic building and professional monitors in the boxes to enjoy the experience.

It will also carry out the development of the application for smartphone and tablet Digital Palco, which will enjoy demand and live the best operas, ballets, concerts and educational content from anywhere with availability in these new devices. Currently, It is available the Samsung Smart TV application for which is planned to be offered 4K recordings produced operas in collaboration with Samsung.

On the other hand, both institutions will work together on an education program sponsored by Samsung to support musical outreach in this area. On the one hand, a collaboration with the network of schools citizenship program Samsung Smart School to which recordings of operas and educational content of the program will be offered is set Real Junior Theater. As well, Samsung will collaborate in the production of recordings of the shows that will be broadcast in schools throughout Spain in emblematic days of music or screenings in theaters nationwide for students and families. A) Yes, different lines of action are set to attract and bring new audiences to these cultural content through technology.

The Royal Theater is immersed in the three years of programming and commemorations with which is celebrating, At national and international level, a double anniversary: the 200 years its foundation and 20 years of its reopening in 1997, after a complex and pioneering architectural rehabilitation, which he became the scene of a benchmark Real, both for its sophisticated theatrical technology, and its functionality.

Likewise, the high quality of his artistic production has led him to be one of the great opera houses nationally and internationally, becoming the first Spanish institution in the field of performing arts and third cultural institution in Spain, after the Prado Museum and the Centro de Arte Reina Sofía. Consistent with its strategy of opening, It incorporates new technologies, signs agreements with cultural institutions around the world and is host of shows covering a wide range of musical genres and repertoires.

Find out more about

Find out more Samsung project is to lead the technological revolution in the world of culture offering a commitment to large institutions and cultural events, creating content and developing applications, supporting new media or digitizing materials, to transform cultural experiences in a new way of knowing.

Samsung technology allows the user to delve without limits in the depths of their curiosity and, with this project, he discovers a new way to explore and experience the culture in innovative ways.