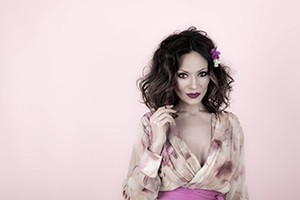 The characters that the Canarian soprano has gradually incorporated into her repertoire Davinia Rodríguez have been transformed into great personal triumphs. The latter has been the last October in Vienna, when it debuted the role of Lady Macbeth impossible, of the opera Macbeth Giuseppe Verdi, next to Placido Domingo. A success confirmed both by the critics –according to which she created “a role that will remain in the memory” - and by the public who rewarded her with a long standing ovation at the premiere and in each of the performances performed at the legendary Theater an der Wien (see attached dossier).

The new year will open for the Spanish singer with her return to Italy, this time to debut the role of Nedda de Pagliacci in her first appearance on stage at the Teatro Regio in Turin, one of the most important in the transalpine country, occasion in which it will be directed musically by Nicola Luisotti. From the popular title of Leoncavallo, the Canarian soprano will sing four performances between the days 11 Y 22 from January.

Important performances await her later, among which stand out his return to the season of ABAO-OLBE in Bilbao to debut the iconic role of Donna Anna from the Mozartian Don Giovanni, her debut in the title role of Maria Stuarda from Twelve at the Carlo Felice Theater in Genoa, Dvořák's Te Deum next to the Philharmonic Orchestra of Gran Canaria and his return to the Teatro San Carlo in Naples with his acclaimed Amelia Grimaldi by Simon Boccanegra.