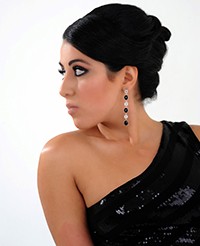 After the recent success in its debut in the role of Leonora in Fidelio, from Beethoven, in the Opera Carolina (U.S), Mexican upward soprano Maria Katzarava prepares for its debut in Spain, when he is interpreting the character of Amelia Il Duca d'Alba, a little-known opera Gaetano Donizetti, the days 13, 15, 17 Y 19 December at the Campoamor Theatre in Oviedo.

Maria Katzarava has collaborated several times with Placido Domingo, who will sing the next 10 November at the National Auditorium in Mexico City to celebrate 55 Madrid debut year tenor in that country.

After his Spanish debut at the Opera de Oviedo, Future engagements take Mary Katzarava the Teatro Comunale of Bologna to take on the role of Micaela (Carmen, Bizet), s Grand Théâtre de Lausanne para interpretar has Marguerite (Faust, from Gounod) and the Festival of Saint Denis in Paris with the Orchestre Philharmonique de Radio France directed by Michele Mariotti to sing the Ninth Symphony Beethoven.