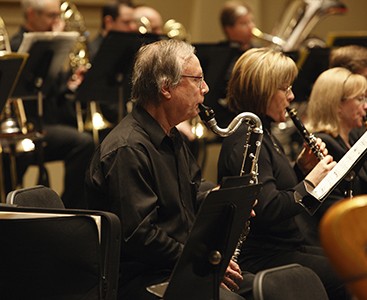 After nearly two decades without stepping on any Spanish stage, the St. Louis Symphony returns to Spain with a tour of four concerts: Valencia (Palau de la Música, 8 February), Madrid (National Music Auditorium, 9 Y 10 February) and Oviedo (Prince Felipe Auditorium, 11 February). The program will present this group in Madrid, within the framework of 47Season Ibermúsica, will be made up of works by Copland, Wallin Y Beethoven –the Seventh Symphony–, in the first performance; Y Adams, Korngold Y Dvořák (Ninth Symphony, Nicknamed “From the New World”), in the second.

the St. Louis Symphony will be accompanied by its Principal Conductor, David Robertson, one of the most in-demand American artists today, which debuts at Ibermúsica with this tour. Also for the trumpeter Håkan Hardenberger and violinist Gil Shaham, both performers praised for their musical qualities. Hardenberger will be the soloist in Wallin's work Fisher King, devised by the composer from Oslo to express all the melodic possibilities of the trumpet.

The program that this group will present is starring some of the most relevant compositions from their country. The argument of Appalachian Spring, by Copland, takes place in a spring party of a community of North American pioneers; while The Chairman Dances, the Adams, uses musical rhythms originating in the United States, like jazz, to evoke a dance between Mao Tse-Tung and his lover Chiang Ching. On the other hand, Korngold, who moved to the United States due to the Nazi persecution to which he was subjected, combines in Violin Concerto Op.35 what we learned in Vienna with the emotional charge of Hollywood film music. The latest proposal with a strong American flavor from the St. Louis Symphony es New World Symphony, de Dvorak, work composed during the musician's stay in the United States in the year 1893. However, in the first of his performances in Madrid, the program will close with the symphony No.. 7 in A major Beethoven, undoubtedly the most energetic of his mature symphonies.

Founded in 1880, St.. Louis Symphony is the second oldest orchestra in the United States, only preceded by the New York Philharmonic, and is considered among the best in the world. In 2005, David Robertson was named Principal Director, the twelfth in the history of the orchestra and the second North American-born conductor to hold this position. In season 2016/17, the group carries out a tour of four concerts in Spain, his first visit to our country since 1998. In this season, keep going, Besides, aspiring to achieve artistic excellence, with responsibility and in connection with the community.

In March 2017, will return to Carnegie Hall to participate in the celebration of the 70th anniversary of John Adams. The orchestra assiduously performs works by this renowned American composer each season at Powell Hall, highlighting his Violin Concerto. This same concert was recorded by Nonesuch Records and will be released together with the symphony for violin. Scheherazade.2 from the same composer, also engraved with L. Josefowicz at the Powell Hall, on February 2016.

In 2015, received a Grammy Award for Best Orchestral Performance, for his recording of City Black and Saxophone Concerto the Adams (Nonesuch). It was the sixth Grammy obtained by this group, as well as his 57th nomination. In season 2015/16, toured California, including performances at Berkeley and Walt Disney Concert Hall in Los Angeles, among many others.

Recognized for his excellent qualities as a musician, programmer and director, David Robertson is one of the most requested artists today. Dynamic, passionate and compelling communicator, with a wide symphonic and operatic repertoire, has established close ties of collaboration with the great international orchestras. In 2005, took over as Titular Director of the St. Louis Symphony Orchestra; Meanwhile in 2014, He was also appointed Principal Conductor of the Sydney Symphony Orchestra.

During the season 2015/16, accompanied the St. Louis Symphony on his California tour. Also noteworthy is the US premiere of the Double Bass Concerto "The wolf" de Tan Dun, with soloist Erik Harris; and the most recent Symphony for violin by John Adams and Scheherazade.2, con Leila Josefowicz. In season 2014/15, Robertson returned to direct the St. Louis Symphony Orchestra en el Carnegie Hall, interpreting the play Weave, de Meredith Monk, and the symphony No.. 4, de Chaikovski. The New York Times wrote about him: "David Robertson led a 'fierce' rendition of the Fourth Symphony de Chaikovski, phrasing tense but natural like breathing ".

Born in Santa Monica, California, was educated at the Royal Academy of Music in London, where he studied horn and composition, before dedicating himself to conducting. He has been the recipient of numerous awards and distinctions. This Spanish tour marks Robertson's debut in Ibermúsica.

Hardenberger is one of the most important solo trumpeters in the world. Collaborate with the best orchestras, directors and composers. In addition to his performances within the classical repertoire, is internationally recognized as a pioneer of new virtuosic works, including compositions by Hans Werner Henze, Rolf Martinsson, Olga Neuwirth o HK Gruber, whose trumpet concerto Aerial performed for the 70th time with the Berliner Philharmoniker last summer.

Likewise, returned to Tanglewood to perform Brett Dean's play Characters, followed by concerts with the Boston Symphony Orchestra, under the baton of Andris Nelsons at the BBC Proms, the Lucerne Festival and Cologne Philharmonie. With this last performance he began his residency 2015/16 at the Philharmonie.

His celebration of the trumpet with the Philharmonie culminated last January with a master class at the Royal College of Music in London.. Other career highlights include world premieres of the Trumpet Concerto Solei Rouge by Thierry Pécou (Radio France Philharmonic) and the Double concerto for trumpet and piano by Betsy Jolas, accompanied by pianist Roger Muraro (Monte Carlo Philharmonic Orchestra); the opening concert of the new Malmö hall; and concerts with the Staatskapelle Dresden, Gothenburg Symphony Orchestra, Bergen Philharmonic Orchestra, Toronto Symphony and New Japan Philharmonic, among others.

Born in Malmö, Sweden, Håkan Hardenberger studied at the Paris Conservatory with Pierre Thibaud and in Los Angeles with Thomas Stevens. He teaches at the Conservatory in his hometown and is Artistic Director of the recently formed Malmö Chamber Festival.. As director, made his debut with the BBC Symphony Orchestra in March 2011, interpreting Endless Parade by Harrison Birtwistle and the Trumpet Concerto Haydn. Hardenberger has been to Ibermúsica three times, since its debut in the year 2010.

Its over 24 recordings have received numerous awards: Grammys, Grand Prix of the Disc, Fingerboard d’Or and Gramophone Editor’s Choice. His most recent albums for the Canary Classics label (founded by him in 2004), include the violin concertos Haydn; he Octet, Mendelssohn, con Sejong Soloists; works for virtuoso of Sarasate, with Adele Anthony, Akira Eguchi and the Castilla y León Symphony Orchestra; o Nigunim: Hebrew melodies, also with Orli Shaham, which includes the world premiere of a sonata composed for him by Avner Dorman; plus many other recordings. Among his projects is the comprehensive works for solo violin by Bach.

He was awarded the Avery Fisher Career Grant (1990) and the Avery Fisher Prize (2008). In 2012, was named "Instrumentalist of the Year" by Musical America, that highlighted the special "humanism" of his interpretations. Play a Stradivarius “Countess Polignac”, from 1699. He is married to the violinist Adele Anthony. Gil Shaham appeared in Spain at 1992 with Ibermúsica

Adams The Chairman dances – Foxtrot for orchestra
Korngold Violin Concerto, on. 35
Dvořák symphony No.. 9 "From the New World"
Tickets on sale www.entradasinaem.es ; 902 22 49 49 or directly at the ticket office of the National Music Auditorium, from 45 €.