La traviata at the Royal Theatre 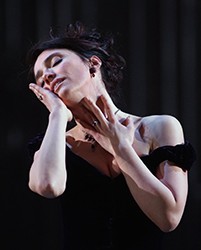 During these days and up 9 of May, he Teatro Real It represents La traviata, from Giuseppe Verdi. A respite for all lovers of classical repertoire and needed a production of this style. Especially after the magnificent production of the public, from Mauricio Sotelo.

La traviata, best-known work and sometimes represented worldwide. But is that La traviata, It has something special. It is history of opera. It is always classic and always offers something new. Something surprising.

This time it is the teacher Palumbo who directs the romantic production David McVicar that we saw in the Liceu in Barcelona. A simple but brilliantly dressed Stage set for drama.

There are three deals for this production, well 16 are the representations for which there are hardly any places for sale.
The sopranos responsible Violetta Valéry character are Albanian Jaho Ermonela, one of the most currently recognized Violettas; Moldovan Irina Lungu, and Russian Venera Gimadieva.

This work, based on "La Dame aux Camelias" of Alexandre Dumas son, Violetta presents a highly dramatic, It not in vain is sick throughout the play until his death. And it is the dramaturgy main mission in its interpretation. Character is approached from that point of view Ermonela Jaho: "A soprano can have a good technique but if there is no feeling, not awaken anything in public. The technique must serve to convey emotion ".


On the occasion of the European Opera Week Royal Theatre, along with other cultural institutions, They have organized various activities.
Week Opera Theater Royal, in which they converge recreational and educational activities, National and international, live or retransmitted, It aims to unite around the opera synergies generated in different artistic and cultural spaces in Madrid, through new technologies and the essential collaboration of institutions and sponsors.

Driven by coincidence, this year, of the International conference Opera Europa in Madrid and European Opera Days, The Royal Theater has devised a special program for the first week of May with which aims to bring the lyrical art to the street, museums, universities and all those who want to see free La Traviata, live, from any part of the world.

Week activities will begin Opera 30 April with the opening of the exhibition "Dress opera" at the Museum of Costume in Madrid, in which they will be exhibited over 30 costumes used in own productions of the Royal Theater, most of them made in their workshops. They accompany the figurines some wigs and props to evoke the theatrical atmosphere for which they were created.
Between 6 and the 8 May the Royal Theater will host representatives 150 theaters and lyric festivals from over 40 countries for Opera Europa International Conference. For three days artistic directors and managers of opera houses from all continents will discuss various topics, among which highlights the role of new technologies for the dissemination of the opera.

While inside the theater discussions and talks succeed, in its main facade, in the Plaza de Oriente, A screen offered throughout the day 7 Y 8 May, a "marathon opera" with fragments of shows, reports and promotional videos, culminating in full retransmission Traviata.

Younger guests will enjoy a fantastic Teatro Real production without leaving their schools, since the day 7 of May, to 12.00 hours, several colleges and institutes will join Madrid this week broadcast live at their centers El retablo de Maese Pedro, from Manuel de Falla, which is anticipated to commemorate the fourth centenary of the death of Miguel de Cervantes. In the main hall they will be attending the show Company Etcetera, In addition to public youth, representatives of theaters and opera festivals gathered in Madrid.
The center of actions aimed at the general public will be the live broadcast, he 8 of May, La traviata, Verdi in different areas of Madrid and other cities in Spain and worldwide, for free, through Digital Palco.

In addition to the broadcast in the Plaza de Oriente (where there will be surprises), opera can be followed live some of the most unique cultural and artistic institutions in Spain: Museo Nacional del Prado, Museo Nacional Centro de Arte Reina Sofía, Thyssen-Bornemisza Museum, Slaughterhouse (Casa del Lector), Canal Foundation, Foundation Francisco Giner, Conde Duque Cultural Center and the Italian Institute of Culture in Madrid.
To cap a week of opera a free open day will be held on Saturday 9 from May 10.00 until 15.00 hours so that the public can visit for free the most emblematic Teatro Real.