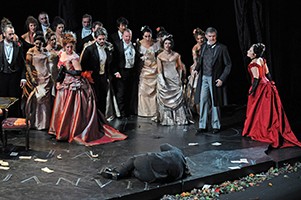 Between days 20 April 9 May the Teatro Real will offer sixteen functions of La traviata, from Giuseppe Verdi (1813-1901), co-production of the Teatro Real with the Gran Teatre del Liceu from Barcelona, the Scottish Opera de Glasgow and the Welsh National Opera from Cardiff, theaters where this assembly has already been submitted.

The popular Verdi opera will return to Real, on this occasion with staging by the renowned Scottish director David MacVicar, scenography and figurines of Tanya McCallin Y, which will lead the Headlines Choir and Orchestra of the Teatro Real and of the three distributions that will alternate in the interpretation of the opera.

The title role of La Traviata will be assumed by the sopranos Jaho Ermonela, Irina Lungu Y Venera Gimadieva. Patrizia Ciofi, initially planned, has canceled his participation in the opera due to a readjustment in his artistic repertoire. The leading trio is completed by the tenors Francesco Demuro, Antonio Gandia Y Teodor Ilincăi, in the role of Alfredo Germont, and baritones Juan Jesus Rodriguez, angel Ódena, Leo Nucci, in the role of Giorgio Germont.

La Traviata will be the star of the Royal Theater Opera Week activities, with the live broadcast of the 8 May in different areas of Madrid (museums, cultural centers, auditoriums, plazas, etc.) and from other Spanish cities. The performance will also be able to be followed around the world for free through Placo Digital coinciding with the European Opera Days and the International Opera Europe Conference that will bring representatives from close to 150 theaters and lyric festivals from over 40 countries.