The villain in the Zarzuela 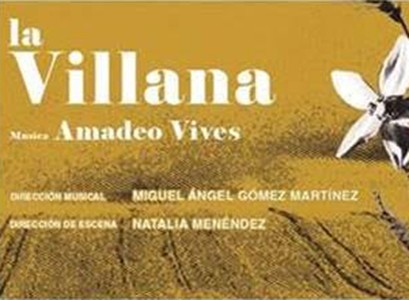 The Teatro de la Zarzuela live a particularly emotional night next Friday 27 from January Thanks to the Recovery zarzuela 'The villainess' Amadeo Vives, which will resound after more than 30 years after his last performance In this stage. A curious data, if one considers that it is one of the most emblematic titles of Teatro de la Zarzuela throughout the twentieth century. the case is also given that this work, with libretto Federico Romero and Guillermo Fernandez-Shaw -based drama 'Peribáñez and the Commander of Ocaña' of Lope de Vega–, will meet in October 90 years after its premiere. Now, almost a century after that distant night of extraordinary success, thirteen functions are available from the 27 January to 12 February.

The assembly is a new production Coliseum Street Jovellanos, and in this work of historical reparation it has just two big names in theater and music. A) Yes, the staging is signed by Natalia Menéndez, and Master Miguel Ángel Gómez Martínez will assume musical direction in front of the Community of Madrid Orchestra (Titular del Teatro), of the Holder Choir Teatro de la Zarzuela and a full cast of big names of our lyric.

The cast is headed in the role of Casilda by soprano Nicola Beller Carbone, singer common in best opera houses in the world, and for him tenor Jorge de León, one of our most privileged voices, in the role of Don Fadrique, Comendador. The Canarian singer arrives in the direct Zarzuela Vienna State Opera, where he played Macbeth Macduff, theater will return to star in 'Tosca' in April, and that same month he will fly to New York to get into the role of Radames in 'Aida' in the Metropolitan.

The third player in contention is the recognized baritone Angel Ódena, now adds to its extensive international career this villain Peribáñez, that is manipulated by the Commander Don Fadrique for the favors of his new bride Casilda.

The soprano Maite Alberola and the Andeka tenor Gorrotxategi, also assume the role of Casilda and Don Fadrique, Meanwhile he Baritone César San Martín It will also get into the skin of Peribáñez. The cast is completed by the soprano Milagros Martín, that will Juana Antonia, the mezzo-soprano Sandra Ferrandez, which will act as Blasa, he Ruben Amoretti under which it has the dual role of personifying the Jewish David and King, he baritone Manuel Mas, who will sing Roque, and the tenors Javier Tomé and Ricardo Muñiz, they interpreted to Olmedo and Michelangelo. He actor Carlos Lorenzo He will play the lazarillo Olmedo.

They will develop the drama that because of abuse of the commander were coming over the newlyweds Casilda and Peribáñez, and they sing between wheat fields and skies of Castile.

This magical effect has been commissioned Boni set designer Nicholas with the close complicity Maria Araujo, the costumes, and Juan Gómez-Cornejo (AAI), faithful creator, as Castilian is, the exact light that require these places so often evoked by writers and poets.

Also involved in the production 11 dancers which choreography He has devised Monica Runde.

'The villain' is a clear tribute to Lope de Vega, as recognized Natalia Menéndez, who defines it as "tragicomedy that deals with the abuse of power. A possible challenge against injustice, where vice, violence and tyranny are punished, and virtue, honesty and dignity get their reward ". As for the music that envelops the drama, the stage director says Amadeo Vives "Combines the traditional and popular background with elaborate melody, transits into them without fear, forcefully, own artistic thinking which prevailed in the early twentieth century ", and this adds that Perhaps most remarkable and latent, is "the joy that prevails in its musical composition. Betting on Love ".