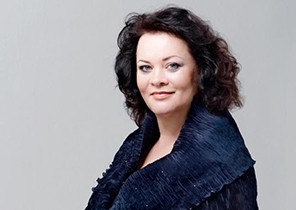 Listen to a recital of lieder in Teatro de la Zarzuela It has something special. The proximity of performers. Intimate communication that is created between voice, the piano and the public. Factors contributing to an atmosphere that engages and excites.

This time, and makes three, Lithuanian mezzo Violeta Urmana llagaba the Teatro de la Zarzuela with works Schubert in the first part and Richard Strrauss in the second.
When you are listening to Urmana not easy to categorize your voice. Endowed with a serious powerful, a central area well built, highly polished and large flow, are their sharp those shown in greater fragility, but are sufficient. His frame of mind has been listed as soprano falcon. intermediate voice between soprano and mezzo and takes its name from the French mezzosoprano Cornelia Marie Falcon (1814-1897), specializing in dramatic roles. The Falcon and self-created style Wagner He wrote three papers for the characteristics of this voice. Ortrud, de Lohengrin, the goddess Venus, Tannhäuser and Kundry, Parsifal. Precisely the role of Kundry has been part, with great success, for Repertorio de Violeta Urmana.

It retains the extraordinary properties of voice, although it had its difficulties with some demanding treble. In exchange, expressiveness in the interpretation, as he demonstrated in The dwarf (the dwarf), giving life to a story with different characters, or praise of suffering (praise of suffering), with which demonstrated the ability to accommodate her voice to each requirement of the score. All it accompanied by a perfect and elegant phrasing. The second part, emotionally intense, He finished shake a satisfied audience that did not leave without hearing the five tips that ended with the recital, Schubert, secret Y sky sparks, and Strauss, Bad weather, Cecilia and classical branch drying.
Accompanied on piano by experience Helmut German, who contributed a performance full of intent and delicacy to highlight the resounding voice of Violeta Urmana, He ended the second recital of Lied XXIII is, a long time, one of the classics that an amateur self-respecting should not be missed.