The legendary Daniel Barenboim returns with his new piano Ibermúsica 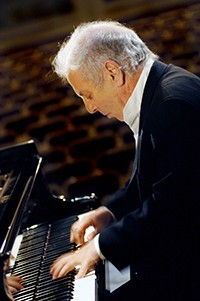 Pianist and conductor Daniel Barenboim, one of the current most unique and profound interpreters of the music scene, will perform next Sunday 27 November within the 47Season Ibermúsica. Barenboim addressed the piano works Schubert (Sonata in A Major, D. 664 Y Sonata in A Major, D. 959); Chopin (ballade No.. 1 on. 23); Y Liszt (Funeral Y Mephisto Waltz No.. 1). the performance, which will take place in the National Music Auditorium in Madrid, It will be the third of its Spanish tour. First will give a recital in Zaragoza (Wednesday, day 23) and Barcelona (Thursday, day 24). Tickets are sold out in Zaragoza and Madrid, last available tickets in Barcelona.

Barenboim, Prince of Asturias Award for Concord in 2002, is the most faithful artist Ibermúsica cycles with 130 Scheduled performances within the same throughout Spain to date. This is one of the great interpreters of the XX and XXI centuries and a key figure who has incorporated into his work an incorruptible ethical and intellectual credo. He is accompanied on this tour a piano designed by himself with Belgian producer Chris Maene and starring his latest album, published in early November by Deutsche Grammophon. It bears by title On my new piano. This new instrument, based on the restored version Liszt Piano Barenboim used in a recital at 2011, It has straight and parallel strings instead of diagonals, which it creates a more transparent and modern warm sound that produced by pianos.

The 47th season Ibermúsica, in which this scheme fits, started last 24 June with the opening concert of the Vienna Philharmonic. Since then, and until May 2017, Programmed Ibermúsica 25 concerts 12 of the best orchestras in the world. This is the brand that bears nearly half a century bringing the best music to Spain. The institution, founded by Alfonso Aijón, It has evolved in line with the times and has managed to preserve the interest in classical music.

Barenboim was born in Buenos Aires in 1942 within a family of musicians. He received his first piano lessons at age five and gave his first public concert at seven. In 1952, he moved with his family to Israel. When he was 11 years, He participated in classes Igor Markevich address, Salzburg and, that summer, He was presented to veteran conductor Wilhelm Furtwängler, he called unique phenomenon.

His precocious talent and brilliance at the piano led his international debut at 10 years in Vienna and Rome; later, he performed in London (1956) and New York (1957), with Leopold Stokowski. Since then, He has made frequent tours of Europe, U.S, South America, Australia and Asia.

He began practicing as a conductor in 1967 after his debut in front of the Philharmonia Orchestra, in London. Since then, he has conducted the most prestigious groups worldwide. Between 1975 Y 1989, He served as Chief Conductor of the Orchestre de Paris. Likewise, as an opera, Barenboim made his debut at the Edinburgh Festival 1973 with Don Giovanni Mozart. From 1991 a 2006, was Chief Conductor of the Chicago Symphony Orchestra and, later, He was appointed by the Director musicians Honorary Life. In 1992, took over as Musical Director of the Unter den Linden State Opera, the most important theater and opera in Berlin one of the most important in Germany. In 2000, the Staatskapelle Berlin appointed him director Life. Both the operatic field and in the concertístico, Daniel Barenboim and the Staatskapelle Berlin have developed an extensive repertoire of symphonic works. Next December he will again lead this group in a concert in the German capital in which they will address My Country, one of the most famous works of Czech composer Bedrich Smetana.

In 1999, he founded, along with the Palestinian writer and intellectual Edward Said (died in New York in 2003), el West-Eastern Divan Workshop, which brings together young musicians from Israel and Arab countries every summer to play together and thereby promote dialogue between the various cultures of the Middle East. In 2014, coinciding with the 15 anniversary of the orchestra, They offered a recital in UAE. Among the numerous awards and distinctions which he has won, include the Prince of Asturias Award for Concord in 2002, Said shared with itself. further, Barenboim is the author of several books: an autobiography, My life in music; Parallels and Paradoxes, con Edward Said; The sound is life: Power of music; Dialogues about music and theater. Tristán e Isolda, con Patrice Chéreau (2008); Y, the most recent, Music is a whole: Ethics and Aesthetics (2012).

Earlier this November Deutsche Grammophon released a new album Barenboim, Batiashvili & Staatskapelle Berlin perform Tchaikovsky & Sibelius, the first project with the violinist Lisa Batiashvili. At the same time his LP also saw the light On my new piano (German Grammophon) with pieces by Scarlatti, Beethoven, Chopin, Wagner and Liszt. At, amazing tonal qualities of the piano designed by Barenboim and Chris Maene perceived, whose names christen this new instrument. The pianist embarked on this project in 2011, after giving a concert with Liszt's restored piano, with the intention of joining with the sound technical innovations before today.