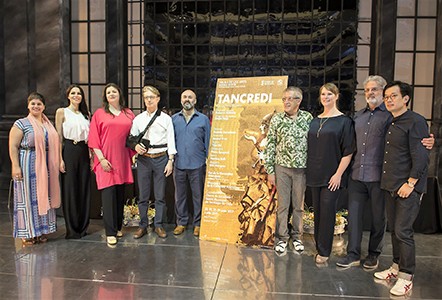 The Palau de les Arts Reina Sofia closes the lyrical season with his first foray into serious opera by Gioachino Rossini, ‘Tancredi’, which will be released next Friday, 23 June in the Main Hall.

"What better tribute can we pay, what to offer a Rossini with the best artistic wickers that can be found in the current operatic scene, at the height of its Rossini Opera Festival of Pesaro or of the best theaters in the world ", Livermore explained.

Roberto Abbado, for second consecutive Year, closes the offer of Les Arts with this title, which he combines with the concert he will conduct at the Palau de la Música with the soprano Anna Caterina Antonacci and the Orquestra de la Comunitat Valenciana on the day 30 of June.

As highlighted by the Milanese teacher: “Rossini has been the greatest opera composer of his time, with great influence not only in Italian opera but also in French. The most fascinating thing is the innovative development, there is no other Italian who has pushed opera forward like him, it was as if I had a telescope to look at the future ".

"He always uses -continues the director- a very typical and recognizable language, that is why the difficulty as performers is that we must know how to distinguish in order to make that same language work differently in a serious opera or a comic opera ".

About the different endings, Roberto Abbado clarifies that of the three that exist: Venice, Ferrara and a Milanese version with other characters, the tragic ending (Ferrara, March 1813) to be seen at Les Arts, corresponds “according to my vision to the ideal of‘ Tancredi ’that Rossini had thought, besides being very innovative because in him the music disintegrates to end in silence ".

This is the seventh staging that Emilio Sagi presents in the Valencian cultural enclave after his celebrated proposals for Spanish opera and zarzuela: 'The Witch' and 'The king rabió', both by Ruperto Chapí; 'Luisa Fernanda', by Moreno Torroba; The duo 'The African', Fernandez Caballero, ‘Katiuska’, by Pablo Sorozábal and ‘Lucrezia Borgia’, Donizetti.

The montage, co-produced by the Opéra de Lausanne and the Municipal Theater of Santiago de Chile, features scenery by Daniel Bianco, costumes by Pepa Ojanguren and lighting by Eduardo Bravo.

The renowned stage director from Oviedo uses an aesthetic “inspired by the early twentieth century, but with a timeless cut ”to“ gain credibility and give a less stuffy image of the script ”. "Rossini's music -says- it is universal and modern too, that's why it works to make a montage away from the original narration word for word, which is nothing more than a story of knights and heroes ".

Daniela Barcellona, Rossinian Reference Voice, returns to Les Arts with one of his fetish roles, Tancredi, that has accompanied him throughout his career since his debut in Pesaro in 1999. This is his third performance at the operatic center, after singing at the Puccini Gala under the baton of Plácido Domingo in 2008, encarnar a Dido in 'Les Troyens', con Valery Gergiev, in 2009, and present for the first time the role of Amneris in ‘Aida’ in 2010.

"For me, Tancredi is a very significant role, because it has been the role that has made my entire career. When I debuted it I knew it was a great responsibility, since before me Lucia Valentini Terrani had sung it. As a character, I still love him very much, it is poetic and very positive, so much so that even though he thinks Amenaide doesn't love him, he fights for her ", underlines the Italian mezzo-soprano.

Jessica Pratt plays Amenaide, his first role in Valencia. the soprano, born in England but raised in Australia, is one of the voices with the greatest presence on the international scene. Since its debut in 2007 as 'Lucia di Lammermoor', his name is essential in the great bel canto productions in Europe and the United States, that has led him to win numerous awards around the world.

“Tancredi’ -añade Jessica Pratt- It was the first Rossini opera that I saw in Italy and also the one that made me fall in love with bel canto. Amenaide is a very interesting role both on stage and musically.. The music is incredibly beautiful, although it is also a challenge because it has a lot to sing: two duets, three scenes and the ending first… Physically it is very demanding, but I adore challenges ".

Chinese tenor Yijie Shi is at the forefront of the operatic scene after being the revelation at the Rossini Opera Festival in 2008 with el papel de Cavalier Belfiore in 'The journey to Reims', followed by a resounding success for the title role in ‘Le comte Ory’ in 2009.

Despite his youth, Yijie Shi already has the recognition of the most prestigious opera houses such as the Metropolitan of New York, Opera San Francisco, el Théâtre des Champs Elysées in París, the National Academy of Santa Cecilia in Rome, and Maggio Musicale Fiorentino, the Rossini Opera Festival in Pesaro, the Deutsche Oper in Berlin or La Fenice in Venice, and has worked with directors such as Roberto Abbado, Zubin Mehta, Kent Nagano and Alberto Zedda.

Born in Rome, the baritone Pietro Spanogli is one of the reference interpreters in Donizetti's repertoire, Mozart and Rossini thanks to roles like Figaro and Conte Almaviva in ‘Le nozze di Figaro’; the leading role in ‘Don Giovanni’; Guglielmo y Don Alfonso in 'So do all of them'; Dandini and Don Magnifico in 'La Cenerentola': Belcore and Dulcamara in ‘L’elisir d’amore’; Sulpice in ‘The daughter of the regiment’ o Malatesta in ‘Don Pasquale’.

The cast of ‘Tancredi’ closes, the emerging mezzo-soprano Martina Belli (Isaura) and the soprano from the Center Plácido Domingo Rita Marques (Roggiero).

‘Tancredi’ is a ‘heroic melodrama’ in two acts with a libretto in Italian by Gaetano Rossi, which was first performed at the La Fenice theater in Venice on 6 February 1813. The text is based on the tragedy ‘Tancréde’, that Voltaire wrote in 1759.

In addition the day 23, Les Arts has scheduled other performances of Rossini's opera on the days 25, 27 Y 29 June plus a last show on 1 of July.