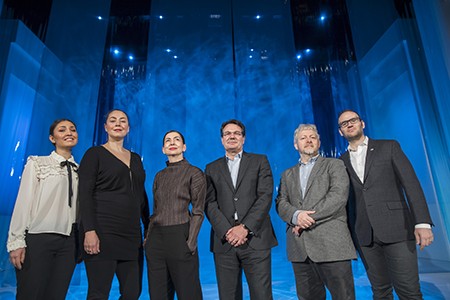 The Palau de les Arts Reina Sofia opens next 28 March in the Main Hall a new production of 'The Rover ', in Verdi, shades of poetic and musical performance historicist.

This has been explained today at the launch of this title Fabio Biondi, director musical, Y Nicola Raab, stage director. In the press conference also attended by the tenor Michael Fabiano, protagonist of the play, with soprano Oksana Diving.

'Il Corsaro' is the first title Les Arts broadcast streaming this season through the European platform OperaVision, thanks to the collaboration of the Valencia Tourism Agency.

Fabio Biondi enacts the most enigmatic and less represented Giuseppe Verdi score with Cor de la Generalitat and the Orquestra de la Comunitat Valenciana. A marked work, as he noted by the teacher palermitano, the historical development and motivation of the composition:

"For the first time, Verdi does not give a work Ricordi but attains an advantageous according to Lucca. The bad relationship with the new editor will determine the fate of this opera. A fact which joins the historic moment of revolution (1848) in which it is written. Political Verdi and the Risorgimento, Operas de como 'Nabucco' or 'The Battle of Legnano', Write a deeply romantic composition ".

The incumbent director of the Orquestra de la Comunitat Valenciana notes, However, the great beauty of the pages of "Il Corsaro ', where moments that recall 'Traviata' or 'Rigoletto' heard, that bind a suitable duration, "An hour and a half of very dense music without lacking moments of interest", Biondi points.

For interpretation, the director has reproduced the size and layout of the orchestra for which Verdi thought 'Il Corsaro'. "The location of the pit, loud enough for the average today, gives advantage singers, especially in the recitatives, very close to the bel canto style ", added the master.

Six years after his successful vision of 'Thaïs', Massenet, in which Placido Domingo in Valencia released its role number 139, Athanaël, Nicola Raab signs its first assembly for Les Arts, It carried out in co-production with the Opera of Monte Carlo.

This time, the 'regista' German has surrounded himself with a creative team of George Souglides (scenery and costumes) David Debrinay (lighting) y Ran Arthur Braun (fight choreographer and shoot).

'The Rover' tells the historia de Corrado, privateer Aegean, which sets sail on a secret mission to attack the Turks, leaving his beloved Medora with the worst fears.

Raab's proposal imagines the story of 'Il Corsaro' in an internal action that takes place in the protagonist's mind, she reconverted himself Lord Byron, author of the poem that inspired Verdi.

The stage is his thought, a blank mind that transforms into different ideas Corrado by projections, lights and movements, where Medora is a past memory and Gulnara an invention that will become reality.

The transmission of this feature is possible thanks to the collaboration of the Valencian Agency of Tourism and specialized television channel Mezzo music.

On Sunday 25 of March, to 12.00 h, Les Arts proposes an intergenerational educational activity to understand what it is and how an opera is produced from the heart of the theater, the stage of the Main Hall. "A morning with 'Il Corsaro'" explained the audience the process of developing this new production, from the first sketches to technical or artistic works.

Les Arts reports that the price of the town is 15 euros for adults and 7 euros for young audiences.