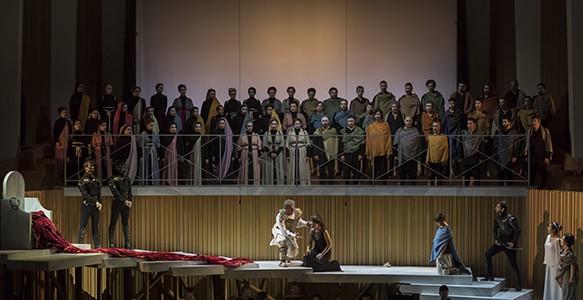 The Palace of Arts on Sunday opening 24 of June, to 18.00 h, ‘The clemency of Tito ', Mozart, in the Auditorium. Arts, which will provide a second function the 28 this month, It presents this work, with musical direction Nimrod David Pfeffer, in semi-staged version.

Allex Aguillera sign the scenic concept of this montage, self-produced by Les Arts, with scenography by Manolo Zuriaga, wardrobe by José María Adame and lighting by Antonio Castro.

‘La clemenza di Tito’ is the last ‘dramma per musica’ written by the genius from Salzburg and the penultimate opera that he premiered before his death. While finishing ‘The Magic Flute’, Mozart took over the commission for the score, which would serve as the main act of the crowning glory of Leopold II of Austria as King of Bohemia.

He 6 September 1791 This serious opera in two acts and with a libretto in Italian by Caterino Tommaso Mazzolá premiered at the National Theater in Prague, based on the drama by Pietro Metastasio.

The work offers the image of Titus, Roman emperor of recognized righteousness, but kind to his people, even before an assassination attempt against him orchestrated by Vitellia, daughter of the overthrown emperor, and carried out by Sesto, ruler's friend, although in love with the ambitious young woman.

The rising teacher and renowned pianist Nimrod David Pfeffer (Tel Aviv, 1984) debuts with the stable bodies of Les Arts, Cor de la Generalitat and the Orquestra de la Comunitat Valenciana. The young director, currently assistant director of the Metropolitan of New York and musical director of the Lyrical Opera of Guatemala since 2016, debuted last February at the Israeli Opera.

Italian soprano Eva Mei takes on the role of Vitellia. Refined performer of the Italian bel canto –Bellini, Rossini, Donizetti y Verdi–, has never stopped singing Mozart and has played almost all the most interesting title roles of this composer.

In the last two decades it has performed in the most important opera houses around the world and has been directed by batons such as those of Nicolas Harnoncourt, Claudio Abbado, Zubin Mehta, Riccardo Muti, Colin Davis, Daniel Barenboim, Lorin Maazel, Franz Welser-Möst, William Christie, Daniele Gatti, Fabio Luisi, Myung-whun Chung, Antonio Pappano and Jonathan Nott.

The three main characters are closed by the Russian ‘mezzo-soprano’ Margarita Gritskova (Sixth). Awarded in various international competitions, is from 2012 soloist of the Vienna Staatsoper, where he has worked with artists such as Anna Netrebko or Piotr Beczala. Likewise, has sung at the Salzburg Festival, at the Rossini Festival in Wildbad, the Lyon and Cologne operas, as well as the Deutsche Oper in Berlin.