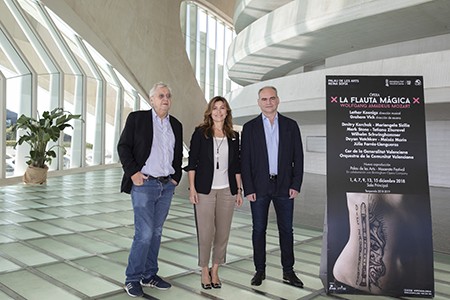 The arts center opens Saturday, 1 from December, its thirteenth subscription season with this title, co-produced with the Festival of Macerata (Italy), and will be until the day 15 this month in the Main Hall.

German director, as he recalled the president of the Board of Les Arts, Susana Lloret, It is a renowned Mozartian baton, what, after passing through Valencia, directed at the Metropolitan Opera 'La clemenza di Tito'.

Born in Aachen, Koenigs teacher cultivates a repertoire ranging from Mozart to Alban Berg, with works in major capitals like Vienna lyrics, NY, Munich or Milan.

Para Lothar Koenigs, 'The Magic Flute' has a music that "grabs you and you feel from within. It recognizes different elements: and references to sacred music in Sarastro, simple and easy to hold melodies Papageno, the dark elements in the second aria of the Queen of the Night ... "

Germany has also stressed the importance of text that includes references to what will be the future of opera, as the scene between Tamino and the Priest, and figures where one guesses as Wagner.

'The Magic Flute' is the third staging of Graham Vick featuring Les Arts, but the first by the 'regista' prestigious center for the Valencian operatic, in collaboration with the Festival of Macerata (Italy).

Graham Vick is one of the biggest names in the operatic scene, and one of its greatest renovators. As founder and artistic director of the Opera Birmingham, He has become the company's flagship modernization and democratization of the opera. Recognized with the highest honors, He has developed his role as stage manager in major theaters in the world.

For this co-production of 'The Magic Flute', English veteran has surrounded himself with a team of Stuart Nunn, responsible for the sets and the costumes, Giuseppe Di Iorio, craftsman lighting, and Ron Howell, choreographer.

Vick explains, This is the fifth production in his career mozartiano Singspiel. This time the Englishman has conceived "a completely new version, including a more open ending that raises many questions and highlights issues such as the role of women ".

In this sense, the founder of the Birmingham Opera remembers that Mozart's work is influenced by Freemasonry: "The Masonic society was exclusively patriarchal, a reality also in the Catholic Church, where the woman has no power and was never allowed review. It is very interesting that these two enemies have that in common, besides the silence and secrecy ".

Likewise, Graham Vick has reduced the German text to add Spanish dialogues involved in the 73 citizens invited to participate in the assembly as the chorus of a Greek tragedy, or a comedy by Aristophanes.

"I appeal to nonprofessional actors -an idea with twenty years I've been experimenting with the intention of enriching the opera, as civic duty, both from the point of view of representation and public. I am seeking a democratic public and opera format that addresses any scale, race or creed of the community in which we live ", has explained.

Les Arts combines experience and youth for the cast of this production, "With artistic excellence as a common denominator", as he recalled Susana Lloret in presenting production.

Dmitry Korchak, one of the most acclaimed bel canto tenors, returns to the arts center to sing the role of Tamino. Valencian operatic linked to the center since its inception, the audience will remember his performances in 'L'enfant et les Sortilèges', Ravel, 'Eugene Onegin', de Chaikovski, 'Cinderella', Rossini, or 'Don Giovanni,' from Mozart.

It begins in the Palace of Arts, Mariangela Sicilia como Pamina. Since its recognition in Operalia 2014, the young singer has emerged as one of the Italian sopranos with the greatest. He is accompanied in his presentation in Valencia also soprano Tetiana Zhuravel, who played the Queen of the Night at the premiere of this show in Macerata and repeats this same role.