Arts unveils 'Turandot' in the memory of Monserrat Caballé 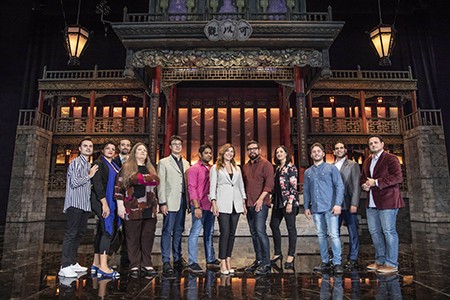 The Palau de les Arts will dedicate the functions of 'Turandot', Puccini, to the memory of the soprano Montserrat Caballé, who died last 6 October, as he announced by the president of the Board of the opera house, Susana Lloret, news conference.

"Les Arts wants and honor" La Superba ", who was a sublime interpreter of the role of Liù and excellent Turandot, besides protagonist of reference recordings of this title ", has added.

The arts center today hosted the presentation of ‘Turandot’, Puccini, main title of the preseason and fruit of the collaboration with Turisme de la Comunitat Valenciana, within the project "The silk road in music" developed by both institutions.

‘Turandot’ is, as recalled by Susana Lloret, a Valencian production that attracted to the Community the prestigious Chinese filmmaker Chen Kaige and, at the same time, was the Les Arts cover letter in China, when Canton, third city in the country, applied for the staging to open his new opera house.

For the fourth time, Puccini's latest opera hangs the “No Tickets” sign, but -as stressed by the president of the Board of Trustees- It is the first time that it can be seen with prices from 7 a 50 euros, Y, so, "Aimed at that new audience that we want to add to this great cultural space without this entailing any loss of artistic quality", has pointed.

The stable bodies of the Palau de les Arts, Cor de la Generalitat, and the Orchestra of the Valencian Community, together with Chen Kaige's award-winning montage join a significant roster of artists, that combines renowned performers with up-and-coming artists who have completed training at the Center Plácido Domingo ”.

The young British director Alpesh Chauhan debuts with the Orchestra of the Valencian Community. The owner of the Arturo Toscanini Philharmonic in Parma, that at a dizzying pace is revealing itself as one of the most promising batons, has conducted two concerts at the prestigious BBC Proms, as well as the London Symphony Orchestra in the main season of the London Barbican, or his own 'Turandot' in the Cagliari Opera House.

The stage work falls to Allex Aguilera, from Les Arts and a great connoisseur of the filmmaker's work, who has delegated to him for all his replenishments. Author of montages like ‘Opérame’, ‘Tristan und Isolde’ or ‘La Clemenza di Tito’, Aguilera also develops an important international career with 'Don Giovanni' in Trieste, ‘The clowns’ in Montecarlo ’, ‘Lucia di Lammermoor’ in Lima, and commitments in Palermo (‘The favorite’) and in Montecarlo ('Othello').

As explained by the ista regista ’, Kaige takes elements of traditional Chinese opera to pose a duality between the real and the unreal. Liu King's realistic scenery is inspired by the Forbidden City that hosted the imperial palace during the Ming and Qing dynasties, while Chen Tong Xun's wardrobe provides contrast with colorful and exaggerated elements to show that 'Turandot' is a character drama on a real stage.

Two acquaintances from the public of Les Arts lead the cast. American soprano Jennifer Wilson, unforgettable Brünnhilde in Wagner's ‘Tetralogy’ and also remembered for his forays into ‘Fidelio’ and ‘Tristan und Isolde’, Turandot stars, opera that already in 2014 recorded with Zubin Mehta and the Valencian Community Orchestra.

The Italian tenor Marco Berti is reunited with the Valencian public with the role of Calaf, who already sang with Zubin Mehta at the premiere of this montage in 2007 and a year later he repeated in Les Arts under the direction of Lorin Maazel. Recognized for its vocal quality and for its stage presence, Berti is considered one of the great interpreters of Verdi and Puccini.

Meanwhile, the Basque soprano Miren Urbieta-Vega plays the role of Liu, that earned him the revelation singer award at the Campoamor Theater Lyric Awards 2015. Artist of the Center of Perfection Plácido Domingo during the season 2010-2011 is one of the Spanish sopranos with the greatest projection.

Abraham Rosalen, who also trained at Les Arts during the course 2009-2010 of the Center of Perfection, encarna a Timur. The young bass develops an important career in Italy, where he already has jobs in Milan, Florence or Venice.

The cast of ‘Turandot is completed by two other outstanding tenors who have passed through the Center Plácido Domingo, Valentino Buzza and Pablo García López, together with the Valencian tenor Javier Agulló, Jaén baritone Damián del Castillo and César Méndez from the current promotion of artists that Plácido Domingo has selected for his Center.