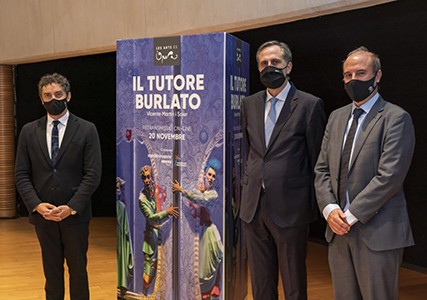 The Palace of the Arts will offer the streaming broadcast of the opera 'The mocking guardian', Vicente Martin y Soler, the next 20 November at 20.00 hours through the Les Arts website, www.lesarts.com, thanks to the collaboration of Turisme Comunitat Valenciana. This was announced today by the regional secretary of Tourism, Francesc Colomer, and the president of the Board of Les Arts, Pablo Font de Mora at a press conference after the signing of the fourth collaboration agreement between both entities. Through this agreement, Turisme Comunitat Valenciana will contribute financially in the actions of promotion and marketing of culture with a maximum amount of 220.000 euros.

As explained by the regional secretary of Tourism, "Four years of agreements have generated a firm alliance for the defense of cultural tourism in the Valencian Community hand in hand with opera and a benchmark such as, the Palace of the Arts ”. In his opinion, “Having found this line of work of the Generalitat with the most emblematic coliseum that we have, It seems like a success "; at the same time that he stressed that “to locate Valencia as a reference city, open and cosmopolitan seemed fundamental to us and constitutes a key piece of the value proposition of our territory ".

During his speech, Colomer has highlighted that "in March the script changed for all, that we are still rewriting, but we do not hesitate for a moment to maintain this agreement, in the need to build a brand and not stop supporting this alliance ". The head of Turisme wanted to highlight "the current need to cultivate new audiences through digital tools", and has advanced that for him 2021 your department will maintain the alliance with the Palau de Les Arts.
Meanwhile, the president of the Board of Les Arts, has recalled the main lines of work in the last four years, which are summarized in visibility and promotion actions, both nationally and internationally, as well as new proposals for pairing between the performing arts and other disciplines, like gastronomy. In this sense, Pablo Font de Mora has underlined that the new agreement includes a section dedicated to the generation of digital content and the search for new audiences, which includes the on-line broadcast of ‘Il tutore burlato’ by Vicente Martín i Soler.

‘Les Arts will offer, open and completely free, the only title that the most international Valencian opera player composed in Spain before embarking on his European career hand in hand in a production carried out by consolidated professionals from the Region ", has pointed. Two Valencians with a consolidated career, Cristóbal Soler in the pit and Jaume Policarpo as responsible for the staging, are the creators of ‘Il tutore burlato’; the second own production that Les Arts offers this season after the semi-staged version of ‘Così fan tutte’, Mozart, which he opened the season.
The cast is formed by the artists of the Center de Perfeccinment Palau de les Arts Aida Gimeno (Violante), Ezgi Alhuda (Dona Menica), By Lebedyev (Fabrizio) and Omar Lara (Foo), together with the Valencian singers David Ferri (Don Lelio) and Gonzalo Manglano (Anselmo).

Streaming streaming
‘Il tutore burlato’ will become the next day 20 in the fourth opera that Les Arts will broadcast over the Internet thanks to the collaboration of Turisme Comunitat Valenciana. In March 2017, the arts center offered its first streaming opera ‘Lucrezia Borgia’, Donizetti, in an action that combined the visibility of the theater's artistic programming with the
tourist attractions of the Borgia Route. To the bel canto reenactment opera of the daughter of Pope Borgia, followed that same year, in the month of october, the concert version of Gluck's ‘Le cinesi’ and already in 2018 'The Rover', in Verdi, one of the
Lesser known and represented works of the composer born in Busseto. Other actions In addition to the generation of digital content, the general director of Les Arts, Jose Monforte, recalled that the agreement with Turisme for 2020 has also contributed financially to the development of the activity of the Season 2019-2020, with the program of 'The trip to Reims', Rossini, as well as the activities parallel to this work such as the ‘Rossini Marathon’. Of the same, Within the promotion section, the agreement also includes the contracting of various advertising media and other marketing actions aimed at giving visibility to the artistic offer of Les Arts.

By last, To point out that Turisme through Les Arts takes another step in promoting the Valencian Community as a cultural destination, as well as in the conservation of the Valencian cultural heritage and in the dissemination of the performing arts; facilitating access to culture, as a basic good.