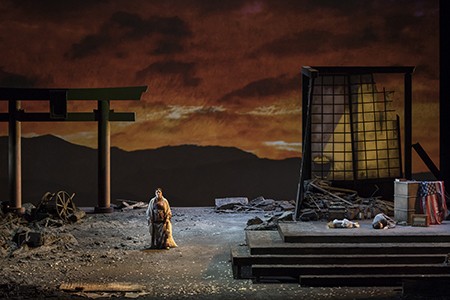 The Palau de les Arts Reina Sofia recreates the destruction of World War II in Japan in its new production ‘Madama Butterfly’, from Puccini, the first assembly of the III Preseason popular prices, which will be released next 11 October.

This has been explained today at a press conference Davide Livermore, Mayor of Les Arts, together with the musical director of this work, Diego Matheuz, stage director Emilio López and soprano Liana Aleksanyan, who plays the title role.

Livermore has stressed the good reception of the Puccini opera, with sold out for all functions for weeks, with only five per cent of capacity available for purchase the same day of the performance.

"This figure confirms that there is interest in opera and what is done at Les Arts, to which must be added over 1.100 localities that have been sold in just two hours when we opened the online sale of season tickets ".

Mayor of Les Arts has stressed that, with the intention to program titles of the great repertoire "to discover the beauty of opera to new audiences", It has decided to make a new production of 'Madama Butterfly'. A fact made possible "thanks to the team of Les Arts, a template of genuine creative, which it allows a comprehensive quality programming, but with a much lower budget compared to other major theaters ".

Diego Matheuz runs for the first time this score at Les Arts. This is the second time that the musician Barquisimeto addresses the Orquestra de la Comunitat Valenciana, after its debut last January in Castelló, and the first that works with the Cor de la Generalitat. Matheuz, which he has been musical director of the legendary Teatro La Fenice in Venice, He expressed his satisfaction with the quality of stable bodies of Les Arts as well as "flexibility to deal with very different repertoires". Considered the new star of the Venezuelan Orchestra System, Gustavo Dudamel has in its most international baton, Diego Matheuz plays an important career in Europe, In addition to addressing performances in North America and Japan.

Emilio López, takes over from Antonio Diaz Zamora, Valencian first who led an assembly opera Les Arts, Why 'Mror', Palau in 2014. The young Valencian director is commissioned to represent one of the most popular titles of the great repertoire, in Valencia staged above the 'régisseur' Japanese Keita Asari and Polish director Mariusz Treliński.

As he explained in his speech: "To make 'Madama Butterfly', I started working, especially, in the character and psychology of Cio-Cio San. I have always seen as a "broken wrist", which is under enormous internal destruction. That inner destruction I wanted to capture the scenery in the mount, e, historically, the warlike atmosphere of the Second World War, between 1941 Y 1945, from the US blockade until the end of the war is the perfect setting ".

"The character of Pinkerton adds López- It is inspired by the pilot who dropped the bombs on Hiroshima and Nagasaki, Charles Sweeney, when I 25 years then. An unconscious boy, he was never able to see the consequences of their actions. A coward".

The soprano Liana Aleksanyan sings the role of Cio-Cio-San, with which debuted at La Scala in Milan under the direction of Riccardo Chailly. This is the ninth time that the Armenian diva enlivens Madama Butterfly, a role that has placed in front of the opera scene.

For the role of Pinkerton, Livermore has announced that, by prescription, Sergio Escobar can not sing the first three functions and will be Alessandro Liberatore Italian tenor who replaced day 11, 14 Y 17 October. The main quartet is complemented by Nozomi Kato (Suzuki), which for two years has formed at the Center of Perfeccionament Plácido Domingo and the Spanish-Brazilian baritone Rodrigo Esteves (Sharpless).