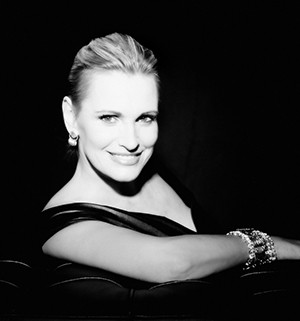 the soprano Ainhoa ​​Arteta, one of the most successful and appreciated Spanish artists in the current lyrical scene, will star in the second session of the cycle 'The Arts is Lied' this Sunday, 29 November at 18.00 hours, in the Main Hall of the Arts. The famous singer will offer her long-awaited debut in the Main Hall of the theater, which had to be postponed last March due to the coronavirus crisis.

Acclaimed by the public and critics, Ainhoa ​​Arteta has performed among other theaters at the Metropolitan Opera in New York, at the Washington Opera, la German Opera de Berlín, the San Carlo Theater in Naples and the Verona Arena. It stands out for its wide repertoire, which includes the most relevant roles for Verdi's soprano, Puccini and verismo among others.

Ainhoa ​​Arteta will return to Valencia next January to make her operatic debut in Les Arts with the role of Mrs. Alice Ford and 'Falstaff', in Verdi, under the direction of James Gaffigan. Malcolm Martineau will be in charge of accompanying Ainhoa ​​Arteta on stage this Sunday.

Born in Edinburgh, he is one of the leading pianists of his generation, and has worked with great international singers such as Thomas Allen, Karita Mattila, Ann Murray, Angela Gheorghiu, Christopher Maltman y Michael Schade, among others.

'The Arts is Lied'
After the success of last season, The second edition of ‘Les Arts és Lied’ will once again bring together some of the most outstanding performers on the international opera scene in the Main Hall of Les Arts. After the long-awaited visits from Lise Davidsen and Ainhoa ​​Arteta, this cycle dedicated to this musical form that combines voice, poetry and piano will continue with recitals by Anita Rachveslishvili (17 from January), Christian Gerhaher (12 February), Sonia Yoncheva (25 of April) y René Pape (16 of May).