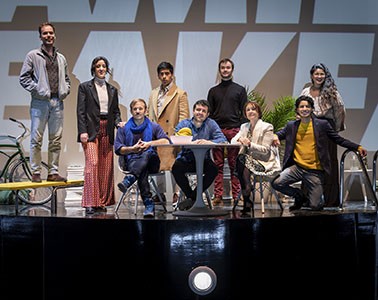 He Palau de les Arts enters for the first time in the lyrical work of Leonard Bernstein con la ópera ‘Trouble in Tahiti, which premieres this coming thursday, 3 of March, Theater in Martín i Soler.

The artistic director of the Arts, Jesus Iglesias Noriega, today presented this title to the media, accompanied by Jordi Francés from Alicante, musical director of the play; Carlos Martos de la Vega, revival stage manager, and the soprano María Bayo, artistic advisor of the Center for Improvement, whose singers make up the entire cast of the play.

As explained by Iglesias Noriega, the commitment to open Les Arts to unpublished composers or less common repertoires also includes the program of the Center de Perfeccionament, as well as your training project, intended to offer the highest and most complete preparation for artists before entering the labor market.

“If a few months ago we met to present the first montage of ‘Un avvertimento ai gelosi’, by Manuel García, the second incursion of the Center for Perfection travels 120 years later in the repertoire to discover to the spectators one of the great geniuses of the s. XX, Leonard Bernstein, still unpublished for our public”.

‘Trouble in Tahiti’ (1952), notes the artistic director of Les Arts, is an acid criticism of the 'American dream', in which the composer of 'West Side Story' portrays the miseries and shortcomings of the capitalist system to the beat of his music, genuinely american, rooted in jazz and Broadway musicals.

As the main novelty for these functions in Les Arts, Iglesias Noriega points out, at the beginning of the function the prologue and the postlude of act I of ‘A Quiet Place’ are interpreted, sequel to this opera, released in 1983, as a premonition of the future that awaits the protagonists, 30 years later, after the Vietnam War.

Jordi Francés from Alicante makes his debut with the Valencian Community Orchestra with this production. As director, his career coexists between the opera, the symphonic repertoire, in addition to the current creation, more than 80 premieres in his rising career. Likewise, Francés combines his activity on the podium with the artistic direction of Ensemble Sonido Extremo, musical group committed to the dissemination of culture and art through music.

After his brilliant staging of 'Les mamelles de Tirésias', Huffman proposes an intelligent critique of the 'American way of life' in a fresh and agile montage that questions the exorbitant materialism of the society of the fifties, placing the protagonists in an empty swimming pool where everything one wishes to buy in this life fits..

The singers of the Center for the Improvement of the Arts make up the cast of the work, with the mezzo-soprano from Madrid Laura Orueta in the role of Dinah, Peruvian baritone Alejandro Sánchez as Sam and members of the vocal trio: Mexican mezzo-soprano Mariana Sofía García, the British tenor Xavier Hetherington and the Mexican baritone Carlos Fernando Reynoso.

In addition to its premiere this Thursday, 3 of March, 'Trouble in Tahiti' will be performed at the Teatre Martín i Soler on the days 9 Y 13 of that month. The locations for this show, one hour, have a single price of 35 euros.