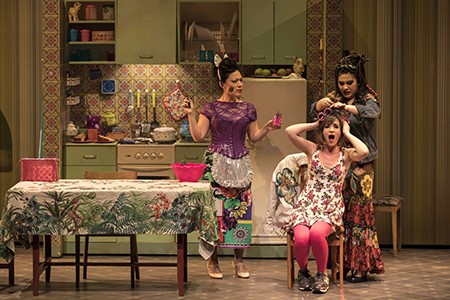 The cast is completed with mezzo-soprano Nozomi Kato, former student of Center, in the role of Lisetta, with the participation of tenors and basses of Cor de la Generalitat Valenciana.

Jonathan Brandani, Italian-American teacher who develops an emerging career in Europe and the United States, He makes his debut with the Orquestra de la Comunitat Valenciana. The young director, It noted for his forays into the old repertoire with his training in L'Eloquenza, He considers that Haydn proposes a music "very significant, of great richness and depth ".

"The score presents complex pages and very difficult, along with the challenge of recitatives, which represent a valuable experience for young artists, which can deepen the Viennese Classicism and the comedy of Italian opera buffa ", He has clarified.

Likewise, Brandani stressed Haydn's ability to create "musically an imaginary world through music on the Moon. A place full of serenity, paz, expressiveness and emotionality, and almost utopian ".

It is about, Besides, the second time that Emilio Sagi working with young singers Placido Center Sunday. In the year 2012, the 'regista' Oviedo presented in Valencia the first zarzuela of this project: The duo The African ', Fernandez Caballero.

The ovetense Director pointed out that the choice of title is "a great success for artists Center, for their demands and the many roles cast, as young singers have to flaunt scenic and musical skills ".

"It's a delightful opera, of great music. It's a comedy in which some young people intend to reason with an older man, deterministic, machista and fogy, freedom to give their daughters to do whatever they want in their lives ", Sagi explains.

Based on a play by Carlo Goldoni, Italian playwright who both wrote about the social changes of the late eighteenth century, the libretto tells a funny plot to make the wealthy protagonist (Good faith) consent marriages of their daughters (Clarice and Flaminia).

To the claims of the parent, who wants to marry young women with wealthy aristocrats, interested suitors (Ecclitico and Ernesto) They take advantage of their interest in the stars to plot deceit and make him believe that travel to the Moon.

In this assembly, that takes the mess the twentieth century, Sagi makes 'The World of the Moon' in showbiz, full of dancers, magic and surprises, and a host of strange things to a bourgeois simple as Buonafede.

Tickets for 'Il mondo della luna' have a unique price 35 euros. In addition the opening day 8 of March, the Teatre Martin i Soler will host more functions day 10 Y 14 of March. The capacity of the representation of the day 12 It is reserved for the public of Degree Program, within the Social Action Plan Les Arts.

The Palau de les Arts will dedicate the performances of 'Il mondo della luna' to the memory of Spanish conductor Jesus Lopez Cobos. The acknowledged master, who died last Friday 2 of March, He was in charge of directing this same work at its premiere, in May 2013, Arriaga Theater in Bilbao.

The arts center recalls his visit to Valencia, in November 2010 in the Auditorium, when he directed the Orquestra de la Comunitat Valenciana in a brilliant program of Spanish music, with Placido Domingo and Virginia Tola solo, which was subsequently presented at the Castell de Peralada Festival