Les Arts delves into the most enigmatic Verdi with 'Il Corsaro' 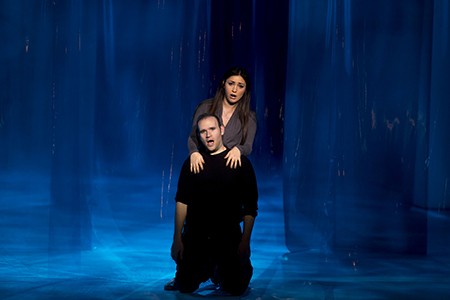 Nicola Raab He runs tests scene from the first new production of the season 2017-2018.

The Palau de les Arts Reina Sofia It delves into the work of Giuseppe Verdi more enigmatic with opera 'The Rover', which opens next 28 of March.

Fabio Biondi, director musical, and Nicola Raab, responsible for the staging, They are immersed in the trials of the first new production of the season 2017-2018.

Six years after his successful vision of 'Thaïs', Massenet, in which Placido Domingo in Valencia released its role number 139, Athanaël, Nicola Raab signs its first assembly for Les Arts, It carried out in co-production with the Opera of Monte Carlo.
This time, the 'regista' German has surrounded himself with a creative team of George Souglides (scenery and costumes) y Ran Arthur Braun (fight choreographer and shoot).

Raab's proposal converts the story of 'Il Corsaro' in an internal action that takes place in the protagonist's mind. The staging of his vision materializes in a white stage space, which is transformed through movements, shapes, images, colors and projections in different environments and ideas through which passes the privateer Corrado.

With Francesco Maria Piave como libretista, Busseto composer in the score squeezes the last drops of his romantic heart, that he was already fascinated by social issues.

Released on 25 October 1848 at the Teatro Grande in Trieste, 'Il Corsaro' appears as an opera master details and vigorous strokes, Prophetic displaying details of the masterpieces that encumbrarían the figure of Giuseppe Verdi.

'The Rover' tells the historia de Corrado, privateer Aegean Sea, which sets sail on a secret mission to attack the Turks, leaving his beloved Medora with the worst fears.