Lidia Vinyes Curtis returns to Madrid with the ONE 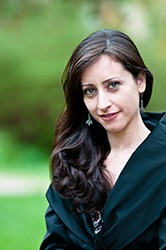 Since this young Barcelona interpreter Lidia Vineyards-Curtis He was awarded in Stuttgart in Bachakademie 2013 his career is on the rise and has not stopped reaping success worldwide. Now go back to Madrid to play the Mozart Requiem with the ONE day 22, 23 Y 24 May before continuing its international tour.

Trained as a violinist in the Conservatory of the Liceu and having collaborated with bands like A Spanish Ayre, Baroque assembly Limoges, or the Catalan Baroque Orchestra, He later studied singing specializing in Early Music at the Conservatoire National de Toulouse and the Schola Cantorum Basiliensi. He has collaborated with directors of the stature of Jordi Savall, Jean-Claude Malgoire, Helmuth Rilling O Sigiswald Kuijken, interpreting both large cantatas and oratorios as the St. Matthew Passion and St. John Passion, from Bach, or Messiah, from Händel. Just recorded an album Human tones the Spanish Golden Age for Naxos.

After passing through Madrid with popular Mozartian work, return to Bach's genius to interpret some of his cantatas in Stuttgart with the Bach Ensemble directed by Vokal Kay Johannsen (26 of June), Santiago de Compostela with opera Rinaldo, Handel, Via Stellae Festival (8 of July), to undertake during the summer tour with the Mass in B minor of Bach that will Saarbrücken (22 of July), Hong-Kong (8 of August), Muehlhausen (15 of August), Arnstadt (16 of August), Weimar (18 Y 19 of August), Eisenach (29 of August) y Leipzig (21 of August) directed by Helmuth Rilling all. In September the new course will begin with a tour and recording a CD of Bach cantatas with La Petite Bande under the direction of Sigiswald Kuiken, before its debut at the Gran Teatre of the Liceu of Barcelona with paper in Ascanio in Benvenuto Cellini, Berlioz, directed by Josep Pons.