The Vienna Boys' Choir inaugurated in Ibermúsica his Spanish tour 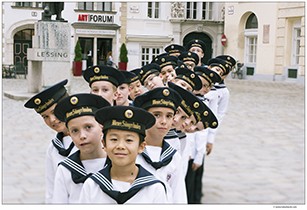 The choir the Vienna Boys' Choir, one of the most established European musical traditions, He will begin his Spanish tour next Wednesday 28 September within the programming of special concerts of the 47th season Ibermúsica. Under the title A trip with Haydn, the Vienna Boys' Choir will perform works by the Austrian composer, and pieces Mozart, Strauss, Schumann and popular songs. The concert of the famous and prestigious group will be held at the National Auditorium of Music, in Madrid, under the direction of Jimmy Chiang. After, will continue the tour in Toledo (30 of September, Toledo Cathedral); Valencia (1 October, Palau de la Música); Barcelona (2 October, Palace of Catalan Music); and in Pamplona (3 October, Auditorio Baluarte).

The chorus, created in the fifteenth century by Maximilian of Hapsburg and rebuilt in 1921 after the fall of the Austro-Hungarian Empire, It is currently composed of 100 showgirls from 10 Y 14 years which are divided into four choral groups to offer 300 They are performing concerts, medium, every year. Throughout the centuries, there have been numerous musicians who have worked for this institution or have started musically it: Heinrich Isaac, W. A. Mozart, Antonio Caldara, Antonio Salieri, Antón Bruckner, Joseph Haydn O Franz Schubert are some of them.

This choir is one of the oldest and prestigious in the world. It was founded by Emperor Maximilian of Hapsburg 1498 Y, until 1918, the choir sang exclusively for the court acts, masses, private concerts and events State; which facilitated the group tours by different countries, as the Imperial Chapel always traveling with the Emperor. Through the centuries, the Court of Vienna attracted famous musicians like Mozart, Salieri Y Bruckner, who worked for the choir. Others, as Joseph Haydn, Michael Haydn O Franz Schubert, They were part of the same.

With the fall of the Austro-Hungarian Empire, the Austrian government took over the court opera, not so with the children's choir. So even 1921, and thanks to the initiative Josef section, the Vienna Boys' Choir is not resumed their activity. Then came a renewal of costumes, repertoire and, from 1926, expanding their concerts to other spaces, undertaking tours around the world. Since then, the choir has performed around a thousand tours in 97 different countries and have offered more than 27.000 concerts.

Currently the group consists of 100 showgirls, aged between nine and 14 years, divided into four choirs. interpret a 300 concerts and performances each year, those who come more than half a million viewers around the world. His repertoire includes everything from medieval to contemporary and experimental works; and songs for choirs and children's operas are an important part of his musical catalog. In the seventies, the choir began to present arrangements Kratochwil Heinz cappella songs of The Beatles; and in 2002 they recorded the album Wiener Sängerknaben goes pop with songs by Robbie Williams, Madonna, Metallica y Celine Dion. Likewise, They maintain the tradition of interpreting the music of Sunday Mass at the Imperial Chapel with the Wiener Philharmoniker and the Wiener Staatsoper Chor, and they act in their own concert hall, Muth.

Austrian film director Curt Faudon has made three films that offer a deep look of artistic quality of the choir: Songs for Mary (2013), a biography of the Virgin Mary through 21 motets y canciones; Bridging the gap - The Power of Song (Bridging the Gap – the Power of Singing) and Good shepherds (Good Shepherds), both presented in 2015. This year, It has begun a long-term collaboration with Universal Music - Deutsche Grammophon, whose first production will be an album with Christmas music.

During the Spanish tour, the choir of the Vienna Boys' Choir will be under the orders of this director born in Hong Kong, within a family of musicians. Chiang began studying piano at age four and began his musical career at 13 as a pianist in a public concert. He also studied cello and composition. Three years later, when I 16 years, He graduated from Trinity College of Music in London; later, Baylor University (USA) Y, with the qualification of Magister Artium, He also graduated at the University of Music and Performing Arts in Vienna. He became known as a director to win the prestigious competition for young directors Lovro von Matacic, en Zagreb, in 2007.

His acclaimed performances of a wide operatic repertoire, symphonic, coral, piano, chamber music and recital, They attest to its versatility and extensive training in various musical settings. As Music Director of the Hong Kong Pan Asia Symphony, He collaborated between 2007 Y 2009 as assistant director of the Wagner Ring cycle, at the Theatre of Lübeck; as well as Kapellmeister of the Theater Freiburg, where he led numerous premieres, between the years 2009 Y 2011. In September 2013, Chiang assumed the position of Director of Choir Vienna Boys Choir.

He has performed as guest conductor of the Komischen Oper Berlin, Symphony Orchestra of Castilla and Leon, Zagreb Philharmonic, Hong Kong Philharmonic; as well as renowned festivals, including Eutin Opera Festival (Germany), FACYL (Spain), Macau International Music Festival, and Rohm Music Festival Kyoto, where he was invited to collaborate with Maestro Seiji Ozawa during summer 2004.