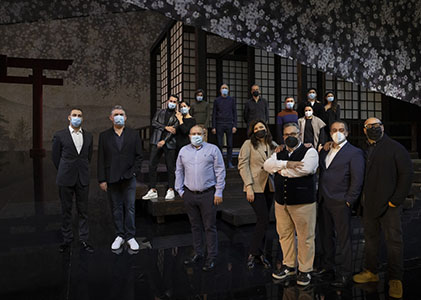 He Palau de les Arts premiere this next 10 December 'Madame Butterfly', from Puccini, with musical direction by Antonino Fogliani and Marina Rebeka as the protagonist.

The artistic director of the Arts, Jesus Iglesias Noriega, presented today at a press conference this montage with which "the one who, possibly, be the composer most appreciated by the Valencian public, Giacomo Puccini". during the presentation, Iglesias Noriega has been accompanied by the musical director of the opera, Antonino Fogliani; stage director, Emilio López; the soprano Marina Rebeka; and the tenor Piero Pretti.

“As part of our search for new styles and repertoires, as I explained at the time, public sensitivities cannot be ignored. Puccini, so the figures indicate, he is the favorite composer of the Les Arts stalls. And within his repertoire, 'Madama Butterfly' stands out for being one of the reference works of verismo, in addition to the richness of his score or the exoticism of his music”, Iglesias explained Noriega.

“For the Arts, It also supposes musically the presentation in the pit of one of the most outstanding names of the new generation of Italian batons., Antonino Fogliani, as well as the debut of one of the great sopranos of the moment, Marina Rebeka, in the leading role, It noted.

Antonino Fogliani, main guest conductor of the Deutsche Oper am Rhein and a good connoisseur of the Italian repertoire, considers that, beyond the oriental elements, “what Puccini was interested in was showing a very strong woman. We do not know to what extent Cio-Cio-San was really in love or if she wanted to escape through that relationship from the chains that the family imposed on her., the religion, suffocating culture.

Les Arts recovers its own production of the opera, with stage direction by Emilio López, carried out together with professionals from the Les Arts technical team: Manuel Zuriaga (scenography), Antonio Castro (lighting) and Michael Bosch (video creation), junto with the Italian fashion designer Giusi Giustino.

As explained by Emilio López: “To make ‘Madama Butterfly’ I worked, especially, in the character and psychology of Cio-Cio-San, whom I have always seen as 'a broken doll', which is under enormous internal destruction. I have wanted to capture this inner destruction in the staging of the montage and, historically, in the warlike atmosphere of World War II, between 1941 Y 1945, from the US blockade to the end of the war”.

"The character of Pinkerton adds López- It is inspired by the pilot who dropped the bombs on Hiroshima and Nagasaki, Charles Sweeney, what had 25 years then. An unconscious boy who was never able to see the consequences of his actions. A coward".

Marina Rebeka returns to Les Arts to debut in the role of Cio-cio-san. The Latvian soprano, one of the great interpreters of 'La traviata', role he sang in Valencia in 2017, assumes one of the challenges of her career as she explains: “not only in the musical plane, by vocal length and duration, but also dramatic because of the psychological and cultural complexity involved in the role of Cio-cio-san”.

The Baltic artist considers the 'geisha' as a woman who wants to deceive herself and tries not to see reality until she is abruptly confronted with her and then sees no honorable way out but to take her own life.. In this sense, Marina Rebeka points out that "one of her greatest challenges has been studying Japanese culture to approach it with the greatest rigor and respect".

Piero Pretti plays the role of Pinkerton, role with which he sings for the first time in Valencia. The Italian tenor is one of the indisputable values ​​of the Italian repertoire, regularly invited by the most renowned theaters: London, Paris, Milan, Berlin, etc.

Les Arts informs that the performance of the day 19 will be broadcast in streaming from OperaVision, sponsored by Opera Europe, that gathers 30 opera companies 18 countries of the continent.