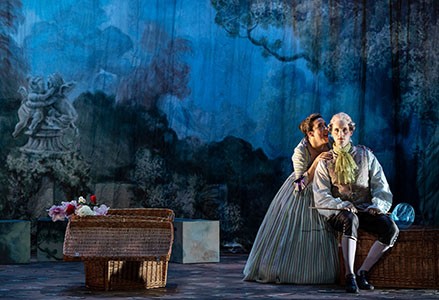 The next 15, 17 Y 18 December, the Juan March Foundation will put the final touch on its project to recover Manuel García's salon operas with the replacement in Madrid of A warning to the jealous [A warning to the jealous], a production of the Center de Perfeccionament of the Palau de les Arts in Valencia. The institution thus closes the stage that it has dedicated since 2017 to the theatrical music in small format of this renowned tenor and singing teacher of the 19th century, father of a long saga of singers such as María Malibrán and Pauline Viardot as well as a prolific composer, who has recovered, in collaboration with the ABAO and the Teatro de la Zarzuela, two other titles: Chinese in January 2017 Y, in May 2019, The dull fake.

Manuel del Pópulo Vicente García (Sevilla, 1775-Paris, 1832) has gone down in history as one of the greatest tenors of his generation. In 1816 premiered in Rome the role of Almaviva in The Barber of Seville, that Rossini composed for him, and during the following decade he presented his operas in cities such as London, Paris, New York or Mexico City. Renowned professor credited with preserving valuable bel canto techniques, he was a prolific composer, author of works that have passed into the collective imagination, as his well-known "Smuggler's Aria", as well as more than fifty operas and operettas, songs, symphonies, Masses and chamber works that the Juan March Foundation has wanted to contribute to recover.

Towards the end of his life, the tenor wrote five parlor operas: The uninhabited island, A warning to the jealous, Chinese, The three hunchbacks e The dull fake. To create them, he relied on long-standing libretti that he adapted to the new domestic interpretive context., conceiving them both for vocal education, musical and dramatic performance of their students as well as for the amusement of friends and family. A) Yes, each opera has a small number of singers and a piano accompaniment, and is conceived as a vehicle for improvisation - a skill he considered indispensable for a singer - as well as brilliant writing in ensemble numbers..

This is the case A warning to the jealous, that García defined as an "opera per società" [sic], conceived for that intimate atmosphere of a Parisian living room. Written for six voices with piano accompaniment, It is based on a libretto by Giuseppe Maria Foppa (1760-1845), a one-act comedy in which a small number of characters are embroiled in various love affairs.

In this production, the design is in charge of Bárbara Lluch, musical direction and piano performance, by Rubén Fernández Aguirre and the interpretation, of the new class of students at the Center de Perfeccinment del Palau de Les Arts. In the argument, an enormously jealous husband, Berto (the baritone Marcelo Solís), he unfairly suspects the infidelity of his precious wife, Sandrina (the soprano Rosa María Dávila). In order to punish you for your jealousy, Sandrina pretends to reciprocate the interest of Count Ripaverde (the tenor Jorge Franco), the new feudal lord, resulting in hilarious complications that confuse everyone. The cast is completed by the mezzo-soprano Laura Orueta, as Count Ernesta's fiancee, tenor Xavier Hertheringon, like the gardener Menico, and the baritone Carlos Fernández Reynoso, who will play the pompous servant of the count, Don Fabio.

The project is a co-production with the Palau de Les Arts in Valencia and the Oviedo Opera Festival, released last 12 November at the Martín i Soler Theater of the Palau de les Arts and which has also been presented at the Principal Theater of Castellón last 2 from December. Next Friday it will be presented at the Auditorium of Teulada-Moraira and on the days 15, 17 Y 18 December at the Madrid headquarters of the Juan March Foundation. Wednesday's presentation 15 in Madrid it will be preceded by an interview broadcast live on Radio Clásica that Jesús Trujillo will carry out with Daniel Bianco, director of Teatro de la Zarzuela.

The audio of the concert will be available 30 days in Canal.march.es.

A warning to the jealous

and the Oviedo Opera Festival

Center for the Improvement of the Palau de les Arts