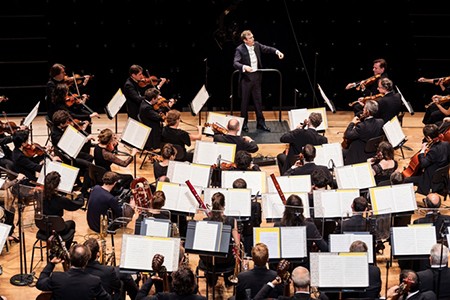 The closing concert of the sixth season Philharmonic It will star the Orchestre de Paris, Daniel Harding y Maria João Pires, the next 17 of May. The Orchester de Paris, one of the great orchestras of Europe, will debut in the season with its principal conductor, Daniel Harding, who will act for the third time at the Philharmonic. Formed with teachers like Claudio Abbado O Simon Rattle, Harding has a long and excellent career that has led him to become chief conductor of the Symphony Orchestra of Radio Sweden, Principal Guest Conductor of the London Symphony Orchestra and, from September 2016, Chief Conductor of the Orchester de Paris. The concert is part of a Spanish tour that will also take them to Oviedo, Barcelona, Valencia and Murcia.

Internationally recognized as one of the greatest artists in history, Maria João Pires returns for the third time Philharmonic, After his successful appearances. This time it will interpret the Piano Concerto No.. 3 Beethoven, under the baton of Daniel Harding, director who has previously collaborated with whom he recorded precisely Piano Concertos No.. 3 and the 4 Beethoven, Award-winning album in "Gramophone Classical Music Awards 2015".

Premiered with the composer as soloist in 1803, he Concerto for piano and orchestra no. 3 Beethoven is one of the great concerts of the piano repertoire, and it will be played majestically by Maria João Pires during the first part of the concert. In the second, will have the third Symphony Brahms, whose famous theme of the third movement represents, through its melodic motif, an encrypted message was the composer slogan: "Free but Happy".

Born 23 July 1944 in Lisbon, Maria João Pires made his first public performance at age four. He began studying music and piano with Campos Coelho and Francine Benoit, Y, Rosl later with Schmid and Karl Engel in Germany. In addition to its numerous performances, He has made recordings for Erato label for fifteen years and for Deutsche Grammophon for twenty years. Since 1970 He has dedicated his work to reflect the influence of art on life, community and education, looking for new ways to implement pedagogical theories in society and promote the exchange of ideas through the development of cultures and respect for these. In 1999 He created the Belgais Center for the Study of the Arts in Portugal. He later expanded this project with initiatives in the cities of Salamanca in Spain and Salvador de Bahia in Brazil. In 2012, in Belgium, He initiated two complementary projects; the Equinox project, It is offering help underprivileged children through choral singing, and the Score project, which aims to create an interaction between artists of different generations and provide a development platform alternative to a world too focused on competitiveness.

The Orchester de Paris is the leading symphony orchestra of France and the main resident orchestra of the Philharmonie de Paris, offering over a hundred concerts each season in Paris and on international tours. The Orchester de Paris is celebrating its 50 anniversary, after giving his inaugural concert 1967, under the leadership of its first Music Director, Charles Munch. Later directors such as Herbert von Karajan, Sir Georg Solti, Daniel Barenboim, Semyon Bychkov, Christoph von Dohnányi, Christoph Eschenbach and Paavo Järvi were happening in the position of Music Director of the orchestra.

This season, Orchestra and Daniel Harding conducted a European tour in February with viola, Antoine Tamestit and after the Spanish tour in May with pianist Maria João Pires, the orchestra will return to Aix-en-Provence Festival in July 2018 to play The Fiery Angel Prokofiev conducted by Kazushi Ono and Ariadne auf Naxos by Strauss directed by Marc Albrecht.

Since its inception, the Orchestre de Paris, with their 119 musicians, It is funded by the French Ministry of Culture and the City of Paris.

Eurogroup Consulting is the main sponsor, supporting the symphonic season of the Orchester de Paris.

Daniel Harding began his career assisting Sir Simon Rattle at the Birmingham Symphony Orchestra, with which he made his professional debut in 1994. He was assistant director Claudio Abbado at the Berlin Philharmonic and made his debut with that orchestra at the Berlin Film Festival 1996.

In 2017 He was awarded the title of Officer of the Ordre des Arts et des Lettres by the French government and 2012 He was elected to the Royal Swedish Academy of Music.