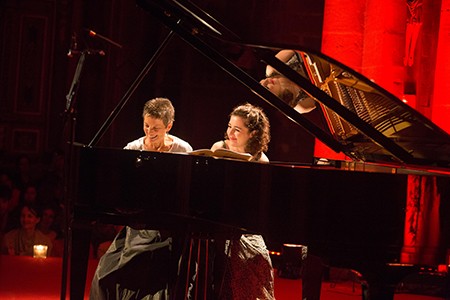 On Wednesday 14 of November, the pianist Maria João Pires returns to Madrid at the hands of the Philharmonic to offer a concert with a very unusual repertoire in which the Sonatas for piano four hands Mozart.

THE RETURN TO MADRID

Each of the appearances of Maria João Pires has been a great event: After his successful appearances, the universally revered and admired landmark returns to Madrid for the fourth time with the Philharmonic. On this occasion she is accompanied by the young Armenian pianist Lilit Grigoryan, which debuts in the season. Both will delight us with Sonatas for piano four hands Mozart, as beautiful as rarely performed.

MOZART AND HIS SONATAS FOR PIANO FOR FOUR HANDS

During his youth, Wolfgang Amadeus Mozart and his older sister Nannerl used to play together very often; during his long tours of Europe, popularized the interpretation of small pieces for piano four hands. Highlights the Sonata for piano four hands, K. 19d in C major, the first that Mozart composed when he was only nine years old. This requires an important technical part on the part of the interpreters.

The composer did not compose music for piano for four hands again until the summer of 1786, in which the Sonata for piano four hands, K. 497 in F major, one of the composer's greatest and most ambitious duets followed by the Piano Sonata for Four Hands K. 521 in C major.

Between the years 2012 Y 2016, Lilit Grigoryan was an artist-in-residence at the Belgian institution for higher artistic education Chapelle Musicale Reine Elisabeth. The first year, The young Armenian pianist was under the direction of the Lebanese pianist Abdel Rahman El Bacha; the following together with Maria João Pires. The latter was an intense and inspiring collaboration with the pianist and allowed Lilit to find new ways to communicate and share her passion for classical music with other people..

With the famous pianist at the head of the "Project Partitura", in 2016, Pires counts on Grigoryan and some of his colleagues to participate and collaborate. The project questions the place, aesthetic responsibility, ethic, social, pedagogical and spiritual in a society where some of the most fundamental human values ​​seem to be in crisis. The team (formed by several pianists, a music therapist, a soprano, a composer and an author) works to transmit education by promoting reciprocal listening between generations: known musicians to encourage young musicians and invite them to share the concert stage. The aim is to allow an open dialogue between the different genres of art and science and to contribute to a more complete understanding of the human beings in their environment..

Born 23 July 1944 in Lisbon, Maria João Pires performed her first public performance at 4 years. He began his piano studies with Campos Coelho and Francine Benoît, and later with Rosl Schmid and Karl Engel in Germany.

In addition to its numerous performances, has made recordings for the Erato label for fifteen years and for Deutsche Grammophon for twenty.

Since 1970 He has dedicated his work to reflect the influence of art on life, community and education, looking for new ways to implement pedagogical theories in society and promote the exchange of ideas through the development of cultures and respect for them. In 1999 created the Belgais Center for the Study of the Arts, in Portugal. Later this project was expanded with initiatives in the cities of Salamanca (Spain) and Salvador de Bahia in Brazil.

In 2012, in Belgium, He initiated two complementary projects: the Equinox Project, It is offering help underprivileged children through choral singing, and the Score Project, which aims to create an interaction between artists of different generations and provide a development platform alternative to a world too focused on competitiveness.

lilit Grigoryan, piano Born in Yerevan (Armenia) in 1985, Lilit Grigoryan began playing the piano at age seven with Arkuhi Harutyunyan; later she was a student of Sergey Sarajyan and Matthias Kirschnereit. Graduated from Rostock University of Music and Theater (Germany) with the highest distinctions. Between 2012 Y 2016, Lilit was also artist-in-residence at the Chapelle Musicale Reine Elisabeth in Belgium., under the direction of Maria João Pires. The intense and inspiring collaboration with the pianist, gave him the opportunity to share and communicate his passion for classical music, creating in 2016, with several of his colleagues, the "Score Project", under the initiative of Maria Joao Pires. Lilit has toured around the world and has performed in world-renowned concert halls such as the Konzerthaus in Berlin., la Philharmonie de Essen (Germany), Elbphilharmonie o el Laeiszhalle de Hamburgo, the Concertgebouw in Amsterdam, the Mozarteum Hall in Salzburg, the Cortot Hall and the City of Music in París, the Bozar Art Center or the Flagey in Brussels, the Palau de la Música Catalana in Barcelona and the Steinway Halls in New York, London and Hamburg. Highlights of the season 18/19 includes the release of his new solo album Orchid Classics with works by Szymanowski, Beethoven, Mendelssohn, Bizet y Bach / Busoni, solo recitals throughout Europe and numerous duet recitals with artists such as Maria João Pires, Sarah Christian y Hiyoli Togawa.