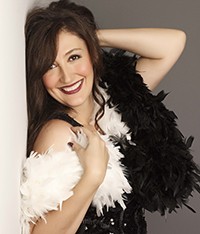 The winner of the National Music Prize 2015, the spanish mezzo-soprano Maria Jose Montiel, April returns to his native Madrid, and doubly. First, between 13 and the 20 of April, will be the protagonist of the absolute premiere of the composer's opera Antoni Parera and libretto Lucia Vilanova Maria Moliner, that will be offered in the Teatro de la Zarzuela and that is inspired by the outstanding Spanish lexicographer. Later, the days 23 Y 26 of April, will move to Teatro Real To participate in Luisa Miller, from Giuseppe Verdi.

Regarding the new opera, a commission from the Teatro de La Zarzuela itself, María José Montiel affirms that “the score is very demanding, taking into account that my character is always on stage. It is fascinating: she was a very strong woman, of great strength and of a fighter with whom a great historical injustice was committed by preventing her from entering the
Language Academy just for the fact of being a woman. Text and music match perfectly. The study hours have been many, but it has helped me to know even more about the music and aesthetics of Antoni, of whom I have sung many of his song cycles. The opera has very attractive melodies and I think it will appeal to all audiences.. His music is of great expressiveness, loaded with soul and feeling. The great luxury of this proposal is to be able to work the work and the character directly with the composer, something that does not usually happen in opera ".

After this absolute premiere, the Spanish diva will return to the stage of the Teatro Real, this time to get into the skin of Queen Federica, from the opera Luisa Miller, de Giuseppe Verdi, title that will be offered in concert version under the baton of James Conlon and next to the Miller of Leo Nucci.

Later, already in may, María José Montiel will return to the Valencia Orchestra season, set with which he will interpret Scheherazade, from Ravel, at Palau de la Música from the capital of Turia.