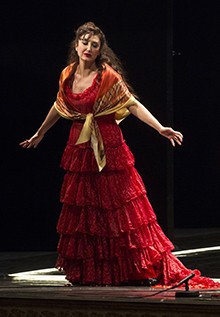 Florida Grand Opera in Miami (U.S) will open its season in late November with the Madrid mezzosoprano Maria Jose Montiel as absolute protagonist: the Spanish diva returns to America with her sensual, temperamental and unique portrait of the most famous gypsy opera, the star of Carmen, from Bizet. With this role, Montiel, National Music Award 2015, there has been a major theaters of Europe, Asia and the United States, It is recognized as one of the top performers of the complex character. And if last year he inaugurated the season with the legendary Teatro di San Carlo in Naples (Italy), under the baton of Zubin Mehta, this year raises the curtain of rising US company. “They will be an unforgettable functions, that's for sure, because I have talked a lot about what is loving public of Miami. Why I love my debut in this fantastic city to be with Carmen, a character who is very dear to me and I know that like, since in Miami there is a large percentage of public latino. further, It is my honor to inaugurate the season”, said the singer.

Maria Jose Montiel is one of the greatest performers of his generation Carmen; his concept of character in the Gran Teatre del Liceu in Barcelona Campoamor earned him the award for Best Singer of the Spanish season. “Since I made my debut, Carmen has become like a sister. We have traveled together all over the world and I've played in dozens of productions, each with a different point of view. I am very interested character for his psychological profile, so you have to race, brave woman. It is ahead of its time that loves freedom above all things, even at the cost of his own life. So I find it fascinating”.

The functions are the days 12, 15 Y 19 November and 1 Y 3 from December, first title of season, precisely, He has chosen Maria Jose Montiel as lyrical image of the entire course.