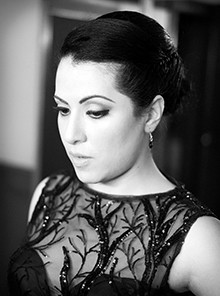 After singing in Mexico La Voix Humaine, from Poulenc, and to debut with great success in the Castell de Peralada Festival (Spain) with Liù from Turandot, from Puccini, the mexican soprano Maria Katzarava signs up for a new challenge in his career: Start the iconic role of Cio-Cio San, the star of Madama Butterfly, the dream of every lyric soprano. Will do it in the Teatro Massimo of Palermo (Italy) the days 17, 20, 23 Y 25 of September. "I am very excited and happy with this new debut", stated the interpreter, “Since it is a character that Puccini endowed with innumerable details of personality that are reflected in the score. I see Butterfly as a very strong woman, determined and who knows what to do. The music is beautiful and the dramaturgy is pure theater. It will also be a challenge and an honor to debut it before an audience of such tradition as the Italian and I am sure it will be an opera that will accompany me for many years ".

After this debut in Sicily, the winner of the Operalia Contest will return to Mexico, this time to sing La Voix Humaine again in Monterrey (30 of September) and to offer, he 4 October, a concert at the Blas Galindo Auditorium in Mexico City to benefit its recently inaugurated El Tecolote Cultural Center Foundation through which it will support young artists with limited resources from the state of Guerrero; in October (days 8, 9, 11 Y 12) will assume for the first time, always in Mexico, the leading role of Florence in the Amazon, from Daniel Catan; he 6 November will offer a charity recital within the cycle Life Victoria organized by the Victoria de los Angeles Foundation in Barcelona, then quickly change the register and get into the shoes of a character who knows very well and who also fascinates: by Violetta Valéry, the long-suffering protagonist of La Traviata, from Giuseppe Verdi. He will do it in a new production by the filmmaker Alice Rochwacher and with which, between 4 November and 19 of January of 2017, he will go on a tour of various cities in northern Italy, as Reggio Emilia, Modena, As, BERGAMO, Cremona, Brescia and Pavia. He 10 January will interrupt the Italian tour to debut in the prestigious Rosenblatt Recitals cycle in London.