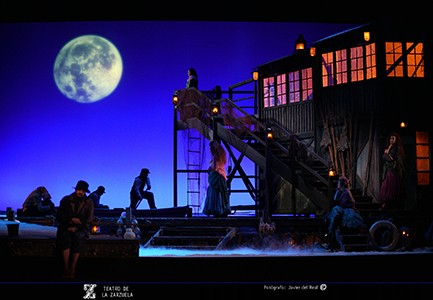 Newly filed Season 2017-2018 with the objective of reach out to all audiences, as the “teatro plural” which is and should be, the Teatro de la Zarzuela puts the This course brooch with a title amateur always appreciates and enjoys special thrill. Is about ‘Marina’, opera in three acts Emilio Arrieta premiered way back 1871 at the Teatro Real in Madrid (sixteen years before he had seen the light in zarzuela format), with libretto by Francisco Camprodón and Miguel Ramón Carrión.

Functions 'Marina' will have the support of the State Lotteries and Gambling Society thanks to sponsorship newly renovated with INAEM for the third consecutive year, for the promotion and dissemination of the performing arts and music, under which the State Society will support the artistic creation of the centers of the Institute.

Throughout the more than 160 year history of the Teatro de la Zarzuela, 'Marina' along with 'The barberillo de Lavapies', 'Play with fire', 'Duo' African '' or 'The Great Vía'- is one of the titles more presence on this stage. But Arrieta, by far, He has starred in more releases than any other season lyrical work.

Certainly a musical pearl in the Spanish side of the genre, production that presents these days in La Zarzuela 8 functions 15 al 24 of June is the replacement of that 'Marina' with address international scene Ignacio García how dissappointed she left the audience in 2013.

For the occasion, Front of Community of Madrid Orchestra (Titular del Teatro) will occupy the pit Ramón Tebar, one of our most cosmopolitan and renowned directors unanimously, who is credited with the Official Cross of the Order of Civil Merit in recognition of his contributions and cultural achievements, and among many other treasures the values ​​being the Spanish first conductor of an opera company in the United States, the Florida Grand Opera. Tebar is also artistic director of the Opera Naples in Florida, principal guest director Palau de Les Arts Reina Sofia in Valencia, Y artistic director of the Symphony Palm Beach. With this 'Marina' is presented by first time to the public of Teatro de la Zarzuela.

The cast, which will take the stage next to Holder Choir Teatro de la Zarzuela, It is composed of young singers, all with important races up, as sopranos Olena Sloia y Leonor Bonilla (the two "Marinas", secretly in love with the young marino Jorge), tenorsEduardo Alejandro del Cerro and Aladrén (in the role of ship captain Jorge. Enamorado turn and furtive manner of Marina, both young people see their futures in jeopardy by half words and misunderstandings), baritones Damián del Castillo and Germán Olvera (who embody the role of bosun Roque, disabused character who uses alcohol as a refuge, and that after all is who intuits the problems and tries to bring order to the tangle), the bass Ivo Stanchev (which acts as Pascual, the umpire in the history of secret loves the seashore) or baritone David Oller (who plays the merchant captain Alberto, owner of a letter that ultimately untie the knot of intrigue sailor). Rounding out the cast members Coro del Teatro Graciela Moncloa Y Antonio González.

Some of these singers They have participated During this season in the Zig-Zag project Teatro de la Zarzuela, in collaboration with the Opera Naples and with AC / E, Spanish Cultural Action, going to the US to participate in master classes of the great Renata Scotto and various concerts zarzuela and Spanish music.

The scenery of this proposal is signed by Juan Sanz and Miguel Ángel Coso, costumes is Pepe Corzo and lighting is a creation of Paco Ariza.

Ignacio García, engaged for years in take our musical heritage around the world, and especially for Latin America where in Mexico it has its second home, He says about male characters that populate this story that "are not little sailors First Communion, but sea lions, Sweaty shipyard workers or marine intrepid who they face the struggle for attention, the love and companionship of the protagonist ". It is done, a Marina, defined as "a confused and frightened woman, with its stunning ocean before the arrival of love, It generates all the imbroglio Weft ".

And so we find a scenic development stinging, as, Garcia says, that they inhabit the characters in the opera "it is a brea world and sweat, saltpeter and effort, a tribute to the people of the sea, who rush to find life beneath the waves and those who await them in the harbor”. It is for all these reasons, what underlie how powerful music Arrieta, "So we wanted to propose a virulent and energetic version, a vivid and aged scene, in which longings are exhausted and are away, far from the world of idyllic postcard a protective and sea holiday ".