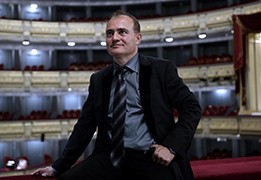 He Teatro Real Has got, at last, squaring the circle and elegantly solve the difficult start of the season after the crisis exit by disease Gerard Mortier He had unleashed.
The agreement with Mortier allowed to continue linked to the theater through a new contractual relationship, artistic adviser. This new figure has as its main function dissemination and international promotion and artistic advice. Moriter loses its executive capacity but the Theatre, with great success, wins its invaluable artistic and operatic capacity. Whenever your state of health permits, collaborate with Joan Mataboch for the good development of the season that has just begun and it is entirely a product of his.
In the same press conference, it has to be presented to the new artistic director of the Theater, Joan Mataboch. What will all effect from 1 from January, since its current contract with Barcelona ends Liceu 31 from December.
Mataboch not ye, in his words, end the legacy of Mortier. He wants to open the theater repertoires, directors and singers who have not been common in recent seasons. Until then supervise the two theaters to facilitate the transition in both. It will from next season when it starts to bite the hand Mataboch, respecting the productions that are already closed, even you want to realize that they were not.
Roundly and enthusiasm has given his artistic vision and what will be the philosophy that joins Real after 16 years of mayor in Barcelona:
"Often opera is identified as a show, but it is neither just nor intentionally a show, as, above all, it's an art. The difference between art and the sheer spectacle is that art tells us about ourselves while a show is entertainment. Art allows us to feel and the Teatro Real has to promote it and make it happen. Already said well Pavarotti: 'You get excited because you put something on your part', and Hegel in his Lectures on Aesthetics: “The art stands in front of man what man is”.
Artistic Director of the Gran Teatre del Liceu since 1997. Previously he was Deputy Artistic director and director of Playwriting the same theater and has also worked as a journalist, opera critic, theater, music and dance in various publications .
Piano has career, Singing and Harmony, He holds a degree in Information Sciences from the Autonomous University of Barcelona and has studied sociology at the Complutense University of Madrid.
He was founder and president of Opera Europa and part of juries of prestigious international competitions, musical and lyrical.
As Artistic Director of the Gran Teatre del Liceu it has been, over the past fifteen years, responsible for the artistic program of the theater and during his tenure has led to standardization in the repertoire of the Liceu of the great composers of the twentieth century, in addition to strengthening the presence of the best singers, conductors and stage of the international circuit.
Joan Matabosch has opted for new productions often with great directors of Spanish theater La Fura dels Baus, calixto Bieito, comedians, Mario Gas, Nuria Espert, Lluís Pasqual, José Luis Gómez, Alex Rigola, Rafel Duran, etc. It has also favored large international co-productions with theaters and has developed a large audiovisual project that includes more than fifty productions editions of Gran Teatre del Liceu.