musical matinees at the Canal Theatre 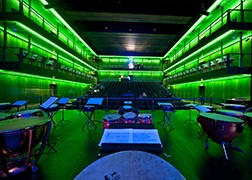 The Theaters Canal of the Community of Madrid present the concert Cámara II, in charge of Threesome Daexis. The appointment will be on Sunday 19 January at 12 hours in the Green room and is part of the Musical Matinés of the IberCaja de Música Cycle of the Youth Orchestra and Choir of the Community of Madrid. The matinee concerts offer popular prices from 7 (minor 15 years) Y 9 euros.
The concert will feature works by Khachaturian, Milhaud, Stravinsky e Ives. The chosen pieces are Suite Op. 157 b by Darius Milhaud composed in November 1936 for the theater play Jean Anouilh The traveler without luggage, The Trio in C Minor, On 30 of Aram Ilich Khachaturian, Armenian composer trained at the Moscow Conservatory characterized by introducing references to the folklore of his country, and the Largo Op.73 by Charles Ives that, without having direct knowledge of European musical avant-gardes, had a developed style ahead of its time.

Ives' work will be performed in the 2nd part of the concert that will end with the suite The Soldier's Story by Igor Stravinsky, premiered in September 1918 in Switzerland. The original work is for violin septet, double bass, clarinet, fagot, trumpet, trombone and percussion, The soldier should be included in the cast, the devil, and a narrator, just like a ballerina. Stravinsky was able to compose the piece thanks to the patronage of the Swiss philanthropist Werner Reinhart, amateur clarinettist, to whom he dedicated the work. Reinhart himself also financed during 1919 creating new chamber music, including an arrangement by the composer himself of The Soldier's Story for clarinet, violin and piano, version that is also included in this recital. The argument consists of the popular Russian story of a soldier and his pacts with the devil with a violin in between.
The Daexis Trio is made up of the violinist David Otero, the clarinet Héctor Abella and the pianist Isis Pérez. Otero, of Segovian origin, He is a full professor at the Rafael Frühbeck Conservatory in Burgos and a collaborator with the Burgos Symphony Orchestra.. He has been concertmaster of the Swiss Musical Youth Orchestra in 2008 and has been part of the Madrid Symphony Orchestra. The clarinet Héctor Abella is originally from Burgos and has been a professor at the Torrelavega Conservatory of Music since 2010. He has polished his mastery of the clarinet with outstanding musicians such as Karl Leister or Harry Sparnaay and has collaborated with groups such as the Jeune Philarmonie of Brussels, Flemish Radio Orchestra, Odón Alonso de León Orchestra or the Burgos Symphony. Isis Pérez is in front of the piano in this instrumental trio. She has been a piano teacher since 2008 at the Torrelavega Conservatory of Music. He completed his musical training with a Postgraduate Piano with Professor Daniela Carapelli at the Giuseppe Verdi Conservatory in Turin. (Italy).
The next musical morning, Chamber III, will be held on 6 April by the hand of the Trio San Sebastián (fiddle, cello and piano). This series of musical matinees will be held in the Green Room of the Canal Theaters.